First off, go to the /FiveReborn/resources directory. You should see a lot of folders. Create a new one called “Welcome” and then go in it.

Now server needs to be told that this is a resource. We tell the server to load this by creating a new file in it, called __resource.lua (2x _ !). Now the server understands that this is something that can be loaded.

"That’s it?" you might ask. No, we need to tell the server what to do with this resource and fill it with stuff that should be done afterwards. Lets open the file.

You might see that there’s absolutely nothing in it. Lets begin to fill it with something.

First off, we add a

at the top. This is required since a recent update to access the new goodies that came with it. Basically it tells the server “This was made for the … update”.

Next we add a

Save the file and create a new file, called “client.lua”. Open it and copy & paste this in it

Now lets take a look at what all this means.

This tells the server "I want to do stuff when something specific happens."

"I want to listen for this event."

"Do the following stuff now, and also pass me where the player spawned."

"I want to show a message to this player. No sender should show up, the sender name (which doesn’t exist here anyways) should show up in the rgb colors 0, 0, 0 (black) and the message should be “Hello world!”"

Now save this file and go to your citmp-server.yml file. Add a - Welcome under AutoStartResources:. Save this too and start up your server.

Now if you join your server and you followed this tutorial correctly, you will see a “Hello world!” in white in the chat. 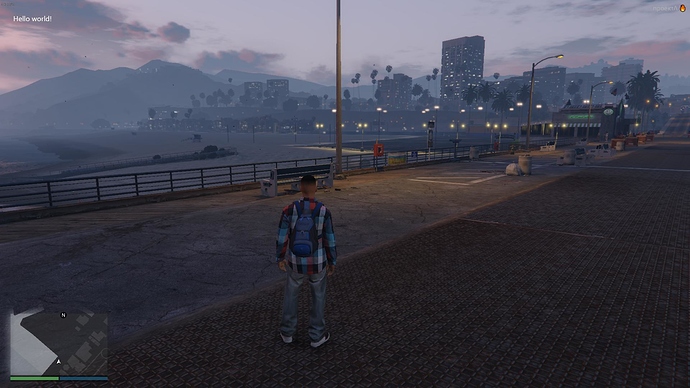 Congratulations! You just created a script that has been detected by the server and even did something.

What now?
The possibilities are infinite! There isn’t much documentation so you’ll have to do some research. This will be your new best friend for that.

Also have an eye in the server console and the F8 in-game console if your script doesn’t want to run.

Use this to quickly check if your syntax is correct.

53 Likes
A tutorial to learn script development?
[HELP] How can I learn?
Want to learn Lua
Information about FiveM scripting
Help with Tornado script
[Release] A Very Simple Welcome Script
[HELP] A good place to start scripting?
Script help!
[HELP] Simple animation hotkey
[Release][Dunko vRP V6.7 - FX Server] UPDATED 18/04/2018 - Supports 15 languages - Zap Hosting 10% DISCOUNT!
[help] show kill name join name?
[Help Needed] Server Startup
How to start programing in lua
Helpful scripting & modding resources
Fresh start
How do I setup a Roleplay server?
Hello, i'm fresh new in the community, and i'm looking foward to learn a lot about scripting
How to create own framework? base?
/Pos /getpos
How i can learn Scripting
Looking for a person to learn me some Lua Scripting
Looking for a person to learn me some Lua Scripting
Cops see cop blips on map
Can someone tell me where to get info?
I need help getting set in the right direction to make my first script
Looking to start Scripting
How to upload scripts
Help_Im_New
[HELP] Need help making a walkie-talie script
Help question teleport script
All event log
[help][js] Get started "hello-world" [solved]
GTA_Mods January 3, 2017, 6:40pm #2

What a great idea! Some people have no idea how to even start scripting in LUA! This is such a great tutorial!

Great tutorial! It would be so cool if you made more tutoris like this!

Thanks, you provided me with exactly what I was looking for to get started!

Where can we find event like “playerSpawned” ? There is nothing about spawning in Native DB

Yes its true i wanted to ask same

Yes because I found the event “chatMessage” in the folder chat, but there is a lot of events like “playerSpawned” that I can’t find. I suppose it’s a native function but idk where find it

Maybe programation isn’t for us

For find -> “playerSpawned”, function(spawn) …
There is nothing on http://www.dev-c.com/nativedb (i think it’s for C# language)
And, where did you found this @pongo1231 and @xander1998

playerSpawned is not a native. It’s a exported function in the spawn manager I think

Yep I think too, but I can’t find it inside spawnmanager

Hello how to add a zone location script for command?

Can you help me for add this script in my folder please?

[HELP] Need help about native, functions and lua
next page →