Christmas Rewards for your Players [QBCore] 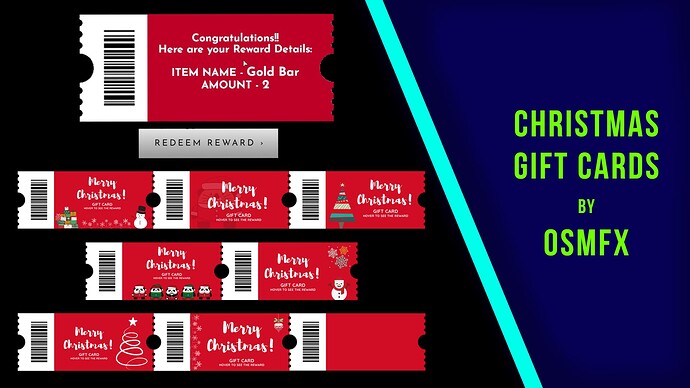 Christmas Gift Cards / Tickets for QBCORE
As Christmas is not too far, I have made this small script for you to reward your players in this festive season. The Script provides you to add giftcards to any shop in your game, using which players have a chance to get random rewards. These rewards can be easily configured in the Config.Lua of the script.

Script is not Encrypted and has no IP Locks

Purchase as Bundle with Christmas Airdrops 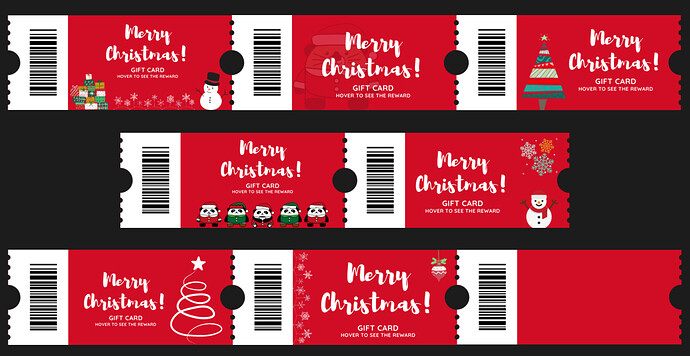 After Purchase you must add the ITEM in your shared.lua (Copy Paste code from Readme)

More Christmas related releases are planned to come, currently in development. The script prices might increase as we go closer to Christmas, hence you are suggested to buy it earliest possible as per feasibility.

My Other Popular Releases :

i think that is overprice. But, just my opinion!
But nice script

Thank you! Probably its inclusive of Sales Tax or something, but its 18 from my side

.
I’ll try to rethink on my pricing probably on my next release. Thanks for sharing ur opinions

Once again OSM makes another amazing addition to any QBCore framework server, these gift cards have my server going nuts, we will be giving them out all holiday and the best part is, you can even use them after the holidays if you have an event or something im sure

no roda copied this script, look at the release dates on the both of the scripts before you say anything, be your own detective thanks ~Jay

Some people are habitual of creating cheap clones of my scripts, he is one of them.

and still people buy mine because they know what’s better

I’ll be honest with you, I also bought Rodas Christmas.

Why?
I didn’t know you had such a script or that yours was original.
I had filtered for “XMAS” 3-4 days ago and his thread appeared.

That’s why I thought your script was from Roda. Why don’t you report Roda?

What should I report him for?

I don’t think CFX Forums have any rules for copying script ideas, though I could be wrong.

I don’t know how your code is built.
But I think it’s almost 100% the same, the UI as well only the button is left with it.

Really good script, it is perfect for this Christmas!

Is there a way to change it for none Christmas?

Yes absolutely, you can contact me, and I can change the ticket designs

BUMPing because Christmas is coming