OSM-Referrals
Easy Referral Based Reward System for your Streamers, Influencers and new players.

Referrals System creates Referral Code for Every Player and allows others to redeem them when they join for the first time. Referrer also receives a reward when his/her Code is used. Logs are published for every thing done in the script.

- No Encryption or IP Locks
You can edit each and everything available in the script. Nothing is encrypted.

Script designed only for QBCore Based FiveM Servers 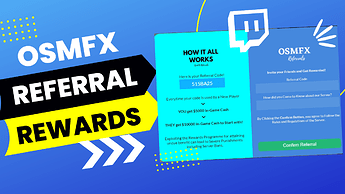 My Other Popular Releases :

you think its easy to recode it to esx?

Great refer script, as streamer its easy to use and great support.

A must-have for any server trying to grow. The developer is very polite and helpful, even went as far as made a custom edit of the script just for my server and my specific needs. Many developers would charge me extra or straight up deny me such a request.

This script is worth every penny.

This script is amazing, I haven’t seen anything like this yet, great job !!!

works amazing, i had one problem witch was my own fault but osmium helped me fix it you get what you pay for 100% worth it if you have streamers in your city.

Great script, very simple to use. Initially some issues with my script but the support given was amazing and the issue was resolved.

If you want a simple referral script where you don’t have to micromanage then this is the one you want!