Each player can connect to the server more than once by sharing a steam account or even running the client multiple times which may allow bugs or exploits on our RedM or FiveM server. This plugin checks before entering server if player with specified steam id or rockstar license is not already connected and if he is it blocks connection. 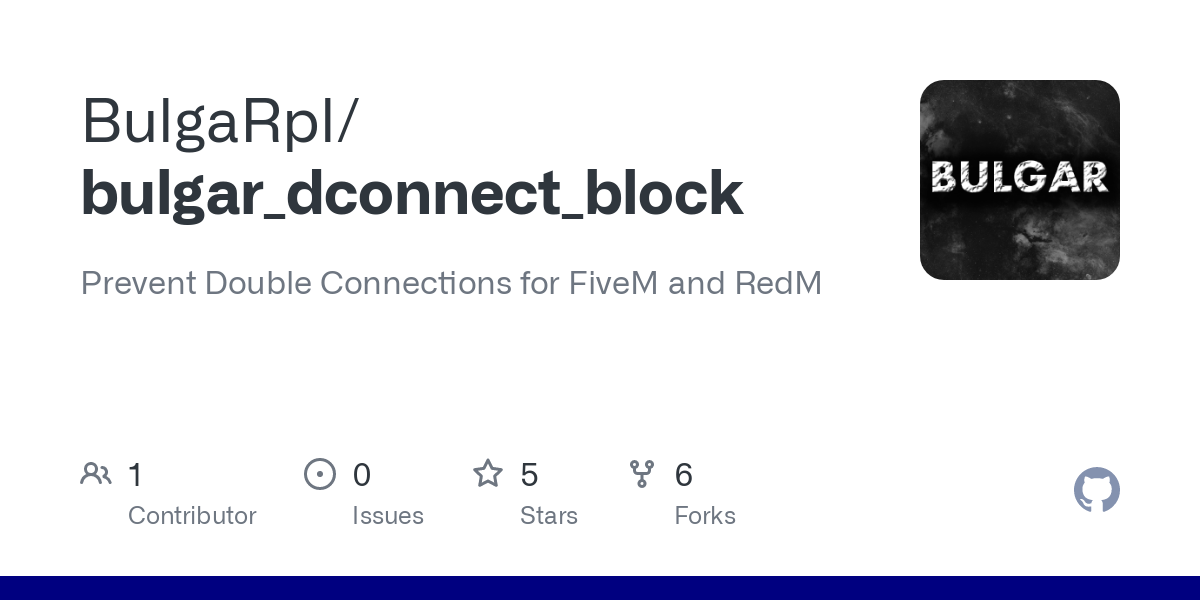 Prevent Double Connections for FiveM and RedM. Contribute to BulgaRpl/bulgar_dconnect_block development by creating an account on GitHub.

This is applicable if your extended is by steam only right?

Not tested, but it makes sense. I know this is/was a huge problem on NP Public.
+1

U can easy change IT to license or discord. I will do IT in some free time.

Your script can be bypassed… . I have made the same error in my script and i have fixed it. Yust try to connect tow times at same time that will not detected with your script.

I have tested it with connecting two times, it blocks the second connection well.

Realy, if you connect 2 client at same time? GetPlayers() does not provide the clients that connect in this erarly state. So it can not work… .

Yes i have tested it before release. When i connect fast 2 times the second client is kicked. But sure when i have more time i can add some code just to be sure it wont be exploited somehow.

Why u keep saying your script? I think u have problem that i have released something like that for free… The script works well there is no need and no point to add multiple id checks at once, it will always work no mather if u use steam or license in config (IT uses the same mechanics that is build in Qbcore). And logging is not a must have if someone want IT the script is free and open source to add own modifications or even create pull request. So pls stop writing bullshit just to try get customers for a max 30 lines code.

The script does its job, I don’t see the need to add more to it. I also do not see the point of adding steam and license checking at the same time if someone uses a license, he will set the license in config, and if steam, then steam depending on what is used on our server for player verification. As for the logs themselves they can be added without any problem if we want… I see here only crying from TheBuster about the fact that someone is trying to share with the community something useful for free.

Oh, sorry!!! I have confused you with someone else. My fault… Sorry again… . Happy Coding