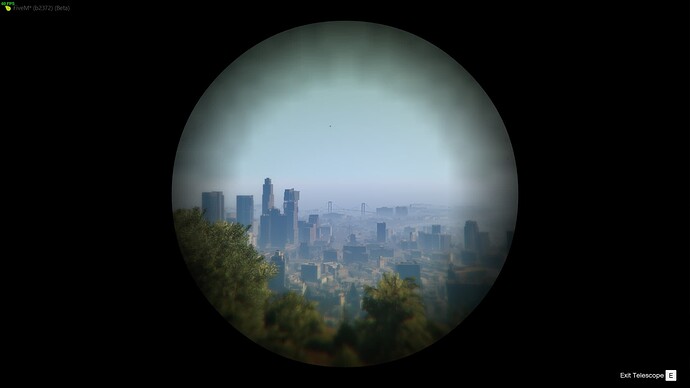 Telescopes is a free standalone script that allows players to use telescopes all around the map. Currently, it allows the player to use /telescope, press E when close to one or to use either qTarget or qb-target as a 3rd eye solution.

Since I was unable to find a telescope scaleform in the game I had to do some trickery with overlaying two binocular scaleforms and some DrawRect() functions to make the illusion of a telescope lens. This might lead to some odd behaviour with ultra-wide screens.

Edit: Thanks to @CritteR for adding the correct scaleform and making it fit all screen resoultions.

I decided to release this to the public since I haven’t seen any other telescope scripts around. The script was made for fun, so the code might not be the greatest, feel free to improve upon it.

Optional Dependencies
As previously stated the script allows for either qTarget or qb-target to be used. They are disabled by default but can be toggled in the config file.

The script also uses mythic notify to send notifications to the player, however, this can be changed. Native notifications are built-in if you would like to use those instead. This can be toggled in the config file.

Optimization
The script runs at 0.1ms when idling if you have the help text thread (gets the distance to the telescope and displays some help text if close enough). It idles at 0.0 if you only use the command/3rd eye.

Known Issues
None as of now. Please report if you encounter any!
(the camera occasionally jumping out of the restricted view for telescopes heading north was resolved on the 19th of June, 2022).

Configuration
The script can be configured to a certain extent. You can see the config file below on Github.
Config file (github)

I made a PR with the correct scaleform, if you want to look at it.

Hey! Thanks,
I just merged the PR, it makes it look so much sharper!
I really do appreciate it!

Makes for a very nice addition to a server. Really cool idea.

Hello! Thats sad to hear, are you uisng the version from gihub or the direct download one? And is there any errors in the console?

I figured out the issue, I have other scripts that use scale forms and I guess there is a limit on how many there can be so I had to reduce the scale forms of another script and now everything works great

Tried it out in the agencies and yup, works

I did some small updates to the script, including fixing a small bug, adding a couple of extra checks and some general improvements to the code. It’s nothing huge but I do advise everyone who is using the script to update it. If you want to know all the details of what got updated you can go through the commit history on GitHub.