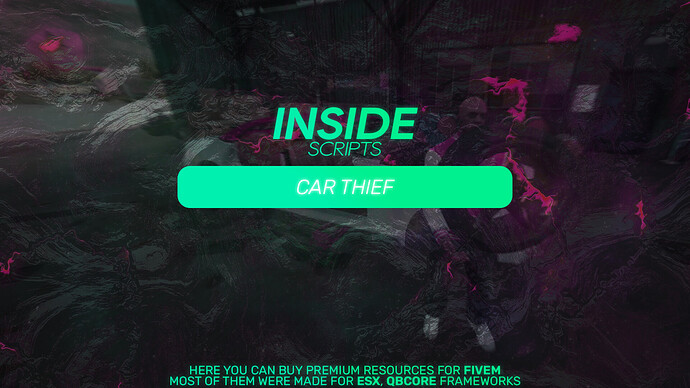 YOU CAN USE YOUR OWN PROGRESSBAR AND YOUR OWN NOTIFICATIONS
I PERSONALISED MINE TO MY NEEDS!

I forgot about that:

Nice job and i also bought it.
but to support easy more vehicles you should use the bones of the vehicles for wheels doors etc. Would save a lot of time to adjust coords and add them for every vehicles.

Honestly, I was looking for a way to do it and I don’t know how I missed it, my mistake

Here an example im using it on my stuff also.

Also,when let’s say Police is gonna interrupt you in the middle of dismantling, are you able to just throw the prop away and run? What happens then?

In the Video at 1:05 we get Money and the Delivered car is removed.

You are unable to throw away the prop. My mistake, because when I was doing this script, I didn’t think that someone would want to set a different location, because there is no chance of escaping Police on the current one.

Well, that’s unfortunate. If you could sort this out, I would be interested in buying this. Just add some distance check that cancels it all.

It will be included in the next Update

One more thing. Thanks to some people, I always have to ask like dumb dumb, since many of them lie about it.

When you say “open code, no IP lock”, it means fully editable code without any authorization, correct? If yes, I’m buying it after the next update.

It does not matter

Sorry for too many questions. But does it also work with OneSync infinity?

Yes, it work with OneSync Infinity

Yo bro i was wondering whatif i wanted to chop my own car not the one i got from the ped is it possible?

Script idea was totally different. If you want, you can of course add it;)

Hi, is the cancelling of the process possible now?