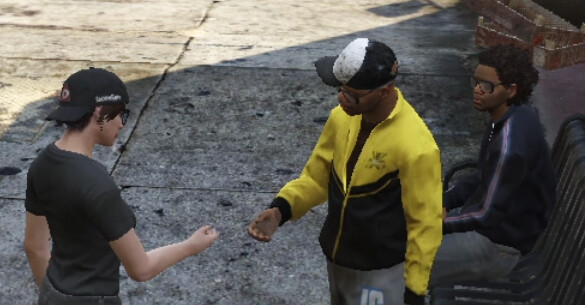 A script that allows the player to sell goods to NPCs walking around. You can limit this to a per-area basis. There’s also checking for the NPCs current status, so you cannot sell to the dead. Furthermore, there’s the chance to fail a sale which may end up in the police being informed.

Can be found on the GitHub page. These may update frequently, and it’s too much effort to keep on top of them in both locations.

Thank you for this script ! Another awsome piece !

i can’t wait for territories script

If I decide to release it

Woooow your scripts are really nice, thanks for the free version !

Can we create a random price range depending on the sales area and also the chance that the police can be called?

If so, it’s fire, because I’m developing an ultra-realistic RP server and I really pay attention to the behavior of the player according to the game features, so if this feature is possible, I know that players will try to find the best sales location, and we might create gang wars for sales outlets intentionally! Besides, I wonder if we can combine all this with your “Bixbi Territories” script, it would make a good synergy !

This would easily replace my crap version of npc selling.

Currently am attempting to adapt it to esx final (whatever the newest version is called) without ox. Pretty new to this but I’m going to try.

When you leave the selling zone, you need to start selling again. Although a lot of zones have been added. Could you please fix this?

When you leave the selling zone, you need to start selling again. Although a lot of zones have been added. Could you please fix this?

Nope, sorry. You’ll have to make edits yourself. I no longer do development on FiveM.

can you add that there are police officers connected to sell?

can you add that there are police officers connected to sell?