This post is written by a group of community members for the community and serves as a way to update you on the latest happenings within FiveM and RedM, which we all love so much.

Here is a list of the most important news and updates from the past week.

Since (no backlash at all) the last time the UI was messed with, the elemental elements thought it’d be a good idea to introduce you to new stuff!
Some of you may have noticed that not only does the UI have a sick loading spinny wheel thing, it also loads way faster now!

“How fast?” you might ask. Well, fast enough to be done loading by the time you’re done reading the title of this topic!

But wait, there’s more!
Some of you may remember the server feed that got added a while back. Well, the new and improved server details page now shows players, resources and the feed in separate tabs! Not only does this look niftier, it also makes it easier for you to see your server’s feed before connecting! 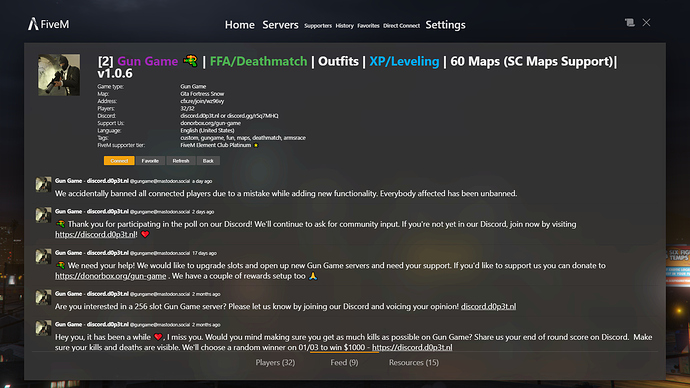 Still talking UI, there is now an option in the settings to choose your update channel without messing with your CitizenFX.ini file at all.
What does this mean? This means that you (Yes, you!

on the Cfx.re Discord inside the #releng channel!

What you can expect from Canary

:
Access to cool, quirky new features and bugs before anyone else gets them!

What you shouldn’t expect from Canary

:
Said features to be stable. But no worries, with your help they won’t be unstable for long!

To finish off this neat UI roundup, there have also been some minor bugfixes to ensure everyone gets a buttery smooth experience.

We know a lot of you are experiencing issues with DDoS on your server and have a hard time with it. Either it’s from one angry player who got banned for FailRP! or it’s from some shady people who does DDoS racketeering, not everyone is equal in their knowledge on how to properly mitigate such issues properly.

Starting from build 2377 you have now the ability to use a reverse proxy to route traffic to your server so your real server IP isn’t exposed. You can use a little proxy container (such as OpenResty, nginx, …) - even running on Kubernetes with replicas and whatnot - all what such an attack will be able to do is target a dummy node meanwhile your traffic can be re-routed dynamically through another node without you needing to do anything! Cute, no?

We know you love to see how many players are currently on your favourite server.
FiveM web server-list is back!
And RedM has one of its own too now!

Speaking of RedM, we would like to thank all players and server owners who make a fantastic job on this platform. Some servers are starting to be constantly full, congratulations!

Sadly, no time exists yet for core updates, but we merge community pull requests all the time, such as this one.

For you technical geeks, we’ve also added a list of the most important technical changes.

Without the Cfx.re community, both FiveM and RedM would not exist. Therefore, we want to highlight some positive and influential members as well as some cool new #development:releases and #fivem-snapmatic

We have a wonderful community who love to help us improving both FiveM and RedM, so here’s a little summary about what these lovely people made this week!

… and has been on a roll otherwise as well, pushing a fix and a tiny UI tweak!

Release of the Week

Did you always wanted to be a Yamakasi ? Well, in FiveM, you can!
Check out Parkour Script from @T.Silence

Relaxed Society Developments This script was made by Silence (…Myself…)

Do not re-release without my permissions

Modify for you own needs!

Open to requests for more abilities!

Comes with a Configuration file!

Standalone Script! About Section *Well, it’s essentially an increased player movement abilities, Used to complete trick jumps and stunts, yea… that’s it. If you have any questions just ask me via the co…

Tired of having pedestrians driving their car through your RP scenery ?
Well, we have the answer, xnTrafficLights from @Smallo !

Snap of the Week

We’re always pleased to see the snap you guys send using FiveM Snapmatic, here’s the two we picked this week!

@Theodorito is quite a lucky guy. Be careful to not lost your

Here is a beautiful caption of a Los Santos Air Force plane!
Is it legal to fly that low thought @UEAF_Akuma?

Got suggestions or feedback for the Community Update? Let us know

Very nice update list yet again. Loving these new natives being available as well. They’re going to be an amazing addition.

Great to see updates rolling in and the community and it’s management more engaged.

Keep up the great work!

How do we use server feedback?

How do we use server feedback?

If you mean the server feed, use sets activitypubFeed [email protected] (or a similar website) on your server config.

CWeaponDamageEvent event doesnt work for me and dont get trigger, return everything at all

Okay, no core updates. But for the amount of money coming in from your patreon, actually having proper documentation would be considered a minimum effort IMO.

Very nice suggestion, could you please open an issue in the fivem docs repository listing the parts you want improvements?

But for the amount of money coming in from your patreon, actually having proper documentation would be considered a minimum effort IMO.

Money does not make for more time. Hiring developers or people able to document anything from within the community also did clearly not succeed (all qualified individuals already had a current job they were not willing or able to reduce or abandon, the other applicants were generally unqualified).

Also, documentation is complete where it should be - complaining in general that ‘wow, the docs are so bad’ doesn’t help us find out what to prioritize to improve at all - if you find anything missing, you’re welcome to point it out on the forums or using the link on the documentation site:

Senpai has noticed me.

Tried it , still no return

Senpai has noticed me.

We wanted to see a video in action as well; it’s a cool idea, but screenshots don’t do it justice!

Are you using OneSync? and a fully updated server?

Yea I’m not the best at making videos lol.