This script brings a totally original system for towing vehicles, players can help their friends who broke down. It could even be used by mechanics as a new way of towing broken down vehicles. All ropes are synced between all players. Vehicles can be towed solo or with a friend controlling the vehicle that is being towed 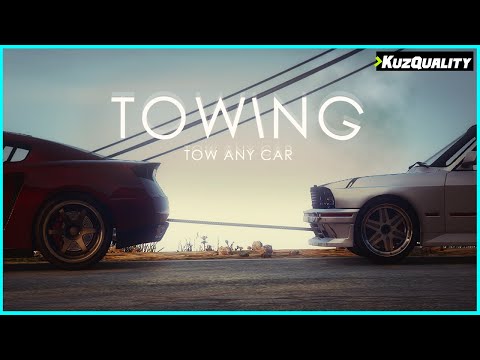 Towing a car without a player inside of it

When an empty vehicle is being towed, the script will take control of the vehicle to make sure it will be towed without a hitch, the vehicle will try to refrain from sliding around and will act almost as if it’s controlled by another player. This will work even on the most laggy of servers or when players internet connectivity/ping isn’t up to standard.

Towing a car with a second player controlling it

When towing a car with another player inside it, the two vehicles will simply be connected by the rope leaving both players in full control of both vehicles. They will be required the steer and brake the vehicle on their own.

This script is standalone meaning it doesn’t require any specific framework to run. It’s possible to run it on a base FiveM server.
That means that. Yes it will run on ESX and QB

(We do have a small built in ESX feature allowing users to use a “Towing rope” item instead of a command to open the menu. Same functionality for other frameworks could be added if necessary)

Hello i love that script do you think its cheapest version of this ? [RELEASE] Rope for any vehicle (network update) [PAID]

and can player sit in other vehicle when its towed ?

Yes, a player can sit and control the vehicle that is being towed

Do you have planned some updates to tow objects or ?

If people request it for sure, it shouldn’t be too difficult to add

Is there a distance limit to attach the rope between vehicles?

purchased, works amazing cant wait to test with some players on and see what they think of it.
THANKS!

The rope length is a static value defined in the config file, sadly because of how we networked the rope it’s not possible to make it shorter/longer dynamically (Aka winch it)
You could however make the rope quite long in the config so players could attach it to the car and pull them out by driving forwards

Oooo, I haven’t seen such an optimized script in a long time! Keep it up <3

We try our best

Amazing! Keep it up!

This is the kind of thing that we hope to see in the fourm everyday whenever we open the page.

Purchase, used it, had a bug, they had it fixed overnight before I woke up. Script runs great, and their support is amazing!

Happy to hear that

what kinda of bug are we talking about? So far i just tested in my localhost. Haven’t release on my public server yet.

Hey, for the command, does it come with permission Ace or job?

Not by default because this is a standalone script, It could be added very easily though

True, I made this for mechanics so they don’t need item to tow