To simulate that the turbo actually did spool up add, if possible, an extra small percentage to the original power of the until you let go of the throttle or reach speeds where you would have the same performance.

A better way would be to just pin the turbo. There’s a native for that, which the script actually uses. 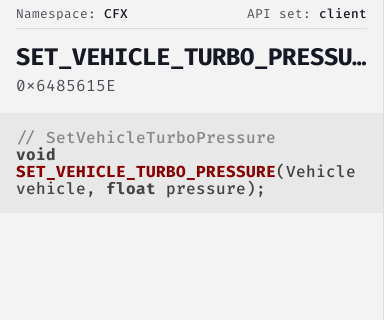 The script does set the pressure(?) to 25, though the game will just clip it back to 1.0 unless some patching is done.

A nice way to integrate the two systems would be to have an instance just being the 2-step rev limiter thingaloo that just cuts the throttle to regulate the RPM, and a separate instance that monitors the actual throttle position and does the pops and bangs (and setting the turbo pressure) in response to the throttle change.

The patch to disable the turbo limit can probably be integrated in FiveM itself and exposed as a native or something, not sure how the thing (FiveM) works.

When done it kinda unlocks the full potential of the turbo (e.g. a more meaningful power increase), as (hardcoded) at full (1.0) boost the turbo only adds 10% of the engine power, so you can more accurately simulate real engines (e.g. an rb26 doing 160kW, the rb26dett doing 235kW, so you use something like 0.3 fDriveForce as base and use 4.6 as boost, which adds the 46% power figure) - with these numbers an anti-lag in gta actually does add value (and brings down lap times).

But hey, racing servers are still nonexistant, “drift” servers use ridiculous handlings and there’s only RP junk around, so why bother with it all. Just give em pops and bangs and most of the player base is more than happy.

is it a way to change rpm

I’d love to have this script within my server as it’s all about gangs and having fun tuning vehicles and making unique vehicles.

A better way would be to just pin the turbo. There’s a native for that, which the script actually uses.

Where would I find this value?

hey love the script any reason there is no sound when i use the anti lag like i see everything, just no one receives sound when their on antilag

I’m actually working on a version 2.0 of this script, May be a while before release seeing as I don’t have as much time as I used to but, Should clear up a lot of concerns people have.

Also I am building an actual Motorsports server with the use of a more realistic vehicle feel, with user friendly adjustability, that will be comparable to a Forza Motorsports game. Inclusive to smoother driven drift cars, with drivable handling that don’t feel like driving on ice blocks… and is actually live in Alpha testing. You seems knowledge if you are interesting in testing, let me know via DM’s.

2-Step is just a juicy rev-limiter… which is part of a launch control setup. a “Proper launch control” setup would be inclusive to Traction control, to reduce tire spin… For the actual “lauch”.

and wtf are you talking about it cuts power?
"It cuts the power which makes the car backfire…"

Literally It’s just retards the ignition timing to just before BDC of the “bang” stroke based on keeping to the ECU/PCM’s reference of engine RPM, to sustain RPM on toggle, and Combustion expansion is pushed out on the “Exhaust” stroke to spool the turbo, Making the “Bang bang bang” out of the exhaust… there is no power cut…

Again wtf are you talking about??
"Also ALS makes your turbo spool up, you see ANTI LAG?"

Anti-lag or ALS systems are not to meant to “spool up” a turbo… The system is meant to keep the turbo from decelerating
i.e. So if you’re running a 30 psi of boost setup, after you release the throttle, ALS keeps it at 30 psi of by also retarding the ignition timing to BDC “bang” stroke, while keeping ECU/PCM’s MAP reference to sustain the amount of boost. hence the name ‘anti-lag’… Not “spool-up-my-turbo-bro”…

Which both of these feature attempt to replicate, with the included boost pressure native, So I suggest you do some digging. Unfortunately, GTAV’s boost equivalency is to that of a Mighty Car Mods, Speaker installation under the hood of a car to replicate the sounds of a Turbo, While preforming to that of a cold air intake with a fan inside of it.