Wow, that was quick! Thanks!

I am trying to record a video of my issue but for now, I realized that I can stand in the fire without god mode but it won’t injure me:

EDIT: also sometimes i run the /startfire command when another fire is active to start more than one fire it says Started fire but I cannot see the fire…

i also have the following error:

There is a few ways to acomplish that, you’ll have to do your research though. The topics in category Discussion should help you a bit. And as far as I know there isn’t a video covering working with sounds using the natives.

Everything is explained here.

Assigning an ace permission is probably the way you’re going to do it and there’s already a link to a guide from Vespura somewhere above in this topic.

You have to put it in your server config, this is how I use it currently;

Also just wanted to say how awesome this script is, currently using the fire dispatch and “random scenario roulette” that it provides with about 125 different calls that I’ve created. The FD loves it but of course there’s been a few gripes that are more outside of the design of how dispatch works. With the current random calls it has a fail safe to prevent multiple random calls occurring, instead the timer seems to be a cooldown timer between calls to give your firefighters time to RP out an investigation and return to station before the next call, or you could have it really short and they only get time to get back into the truck before the next fire starts.

If you plan on using the random calls whenever anyone wants to be online, unless that person clears the last call it can stay without anyone being dispatched to it and will prevent another call from going out, essentially locking out people from later being able to use it. The ‘stopallfires’ command works to get around this, as does script and server restarts, but that would require someone with the ability to use all the commands for the script, and could destroy a lot of hard work depending on how much effort you put into the script.

Besides that, the script works wonderfully. Fires are actual fires and grows with spreading unlike the common fire script most people use based on Albo’s original that plops a field of fire. With chance of spreading added in you can make it a race to see if the firefighters are able to hose down the flames before it regains some strength. There are times because of this I question if the script suddenly broke mid-fire or if the coordinates I put in were wrong and it spawned in the map, but it’s honestly just the strength of the fire and actually takes time to take out.

Thanks for the feedback, I really appreciate it!

I am aware of the slight problem with the spawner and will look into it in the future. Any suggestions as to how it could work alternatively are welcome

I will probably add a timer which will eventually put the fire out automatically, thus allow another one to start. It could take a few weeks for me to have a look at it though, I’m a bit busy right now 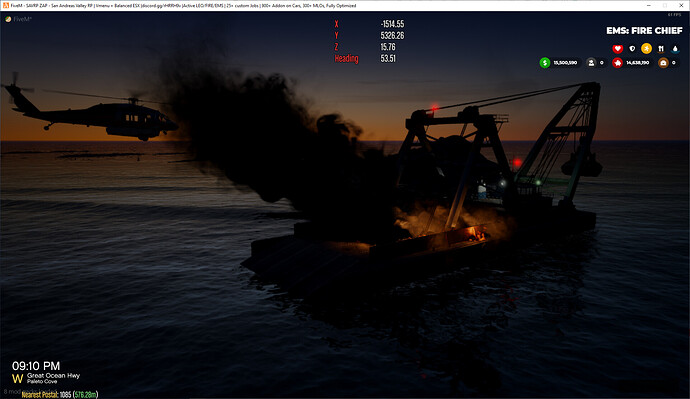 One of my players sent me this tonight, they are loving the script. Thank you!

Thank you all for the recent feedback, both here and in DMs!

Today I had a thorough look at the script and addressed most (if not all) of the issues you had. While I was at it, I also kind of as a reward (

) added support for custom dispatch messages as was previously requested by many.

Do you already have saved fires? That they start on their own? Or has someone posted it?

Hey there. I love this script. I really want to create a Fire department on my city.

Is there any way to check if a fire was completely extinguished?

Hi Pretherbcl - from what I have noticed, the fire blip on the map goes away shortly after the final flame is put out. Additionally once the final flame is out - it force stops the fire to prevent other clients from still seeing an already extinguished flame.

As of now, unfortunately not. The blip is set to disappear either way after a few minutes depending on what you’ve set in the config. That’s solely for the purpose of RP which doesn’t usually end by extinguishing fire, although it might be removed around the same time.

So, the only way to know is to drive there.

If what you’ve meant was whether you could retrieve this information server-side, I haven’t made any event for that. It could be added quite easily though. Let me know if that’s what you need.

Do you already have saved fires? That they start on their own? Or has someone posted it?

That’s what I call scenarios in the docs (see wiki on the GitHub repo). The fires do get spawned automatically depending on how you set up the script. As for any existing scenario configs (fires.json), I don’t have any unfortunately, but I’m sure somebody here has a great set of their own they would be willing to share