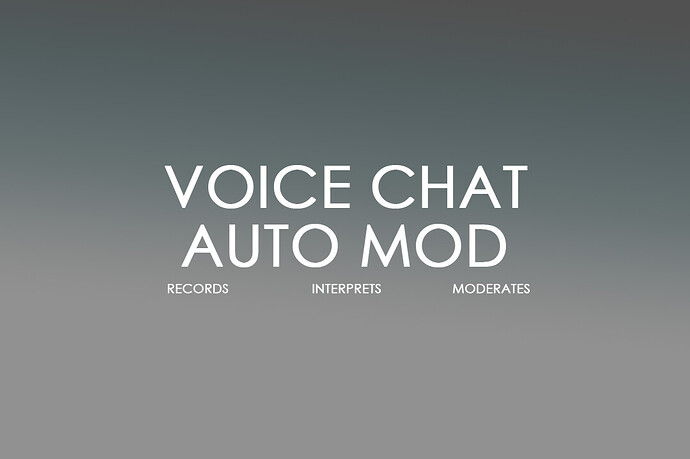 Hello FiveM community. I realized how hard my old voice chat transcriber was to setup and use, so I made a new one, which does not require an external mumble server, and has a setup script provided, making this a 1 click install process (Assuming you have Python 3.10)

To use an external Mumble server, the server has to support at least Murmur 1.4.x because of the addition of listening channels.

I have tested this recorder on all major voice chat resources, Including:
mumble-voip
pma-voice
vVoice

Note that this script does not work with voip services that don’t use Mumble, which includes Tokоvoip

Most issues you will experience will be with previous Python installations. To fix these issues, uninstall all versions of Python currently installed and reinstall Python 3.10.

Configure the configuration values in the bot.py script

Run the setup.bat file, which will install all dependencies

Run the Start Mumble Bot.bat file, which will configure opus and run the bot

To access transcriptions from your resources, you can do

To set an Rcon Password on your server, add this to your server.cfg: (Replacing “Dalrae” With your password)

Note that, due to COPPA laws, it is ILLEGAL to use this program on children under 13.
In both the European Union, as well as the United States, using this program requires consent

Recommendation: Have an adaptive card when joining your server where the user can agree to terms, including that they are over the age of 13, and allow the use of recording software for moderation purposes.

p.s You are crazy but of course in a positive sense

Hey man nice work sounds cool but what exactly does this do? I’m not sure I understand what this is used for?

Hello, please refer to FiveM Voice Chat Automoderation - YouTube which will tell you all the information

Is there any way to change the speech recognition language?

Yes, absolutely. I have provided a config value to change the model which the voice transcription uses. Here is the official models, however I’m sure there are more unofficial ones if you look on Google

Also note that the bigger the model, the longer it will take to transcribe.

Can’t wait to test this out. I do hope there’s some more details about the user that is speaking, though, as a simple name might become confusing/problematic.

Mumble does provide me with the ID, as well as the name which I do use in file name, as seen here

Im not sure what im doing wrong ive never installed anything like this but it wont run the Start Mumble Bot.bat im getting bot.py no such file or directory process: terminated everytime

I haven’t heard any reports of this. It seems like your IDE, Codeblocks, is not supported. I don’t use Codeblocks, but if someone that does submits a pull request with support for it I will happily merge it

Do i still need the dependencies listed in your previous post… I havent installed any IDE could that be the problem. Also nothing has to be actually installed to the server through ftp right… Sorry for all the questions like I said this is my first time setting something like this up.

The only dependencies needed are the the ones listed above, the instructions for the old one are not correct for this version. I searched the error that you’re experiencing on Google and it seems to be a Codeblocks IDE error, so I am very confused.
You should just be able to run it through the Windows command prompt, assuming you have Python 3.10 installed.

I’ve submitted a PR on the repo to fix. The start file uses the wrong name for the script
Quick fix (which is what the PR is) is updating line 23 of “Start Mumble Bot.bat” to %pythonpath% "DalraeMumbleBot.py" instead of it saying bot.py

As the title says, fixing the start batch file to use the correct name of the sc…ript

Woah, I don’t know how I let that slip in there. I didn’t even realize that, thanks!

so this should fix my issue right… Because its still doing the same thing do I need to uninstall and reinstall python because im using version 3.10 already

Yes, this should have fixed your issue. You shouldn’t have to reinstall Python
Are you downloading the bot from here?

yes i just downloaded that after uninstalling the old version and still after setting it up when I try to run the start Mumble Bot.bat im still getting that same error

Is this being taken down the download link isnt working