Welcome to the 5th weekly update for the Cfx.re community, spanning FiveM, RedM, and overall Cfx.re updates. This update has been a little bit delayed, because we knew that the Cfx Developers had some neat features to be added soon so we wanted to wait for that.

This post is written by a group of community members for the community and serves as a way to update you on the latest happenings within FiveM and RedM, which we all love so much.

Here is a list of the most important news and updates from the past week.

“This” week, several improvements have been made to the Rockstar Editor implementation in FiveM, like actually implementing it!

(Although you’ll still need a resource for recording)

“What are these improvements?”
Well, let’s go through some of them! 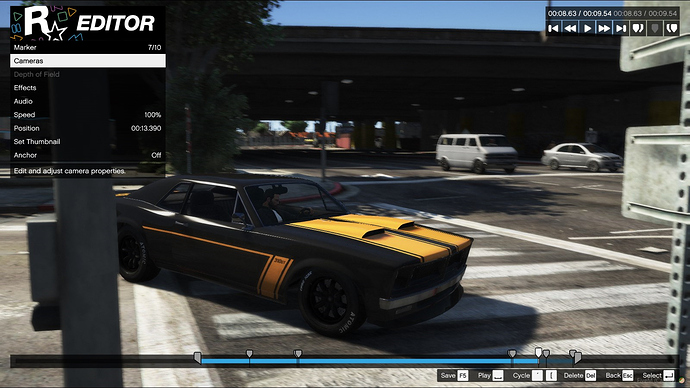 Starting off, now when you choose the Rockstar Editor option in the pause menu, you will be automatically disconnected from the server you’re on. That means you don’t have to do it yourself anymore.
Additionally, server resources used in clips are correctly saved so that, as long as you don’t clear your cache, you can edit this clip anytime, anywhere! 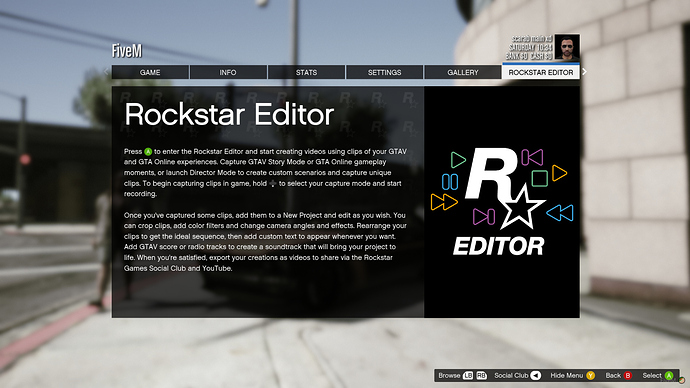 Want to take some sick pictures for our community spotlight? Well, you can save Snapmatics through the editor, that way you can take some very nice, cinematic shots that would make any photographer go: “Woah!”

(You could do this before as well, but not everyone knew about it, like me… Okay maybe it was just me.)

But what if you want to export your video? That also works nicely!

Once you’re done with all your editing, the “Exit to Story Mode” button will correctly take you back to the FiveM menu, that way you can go back to playing like nothing ever happened! 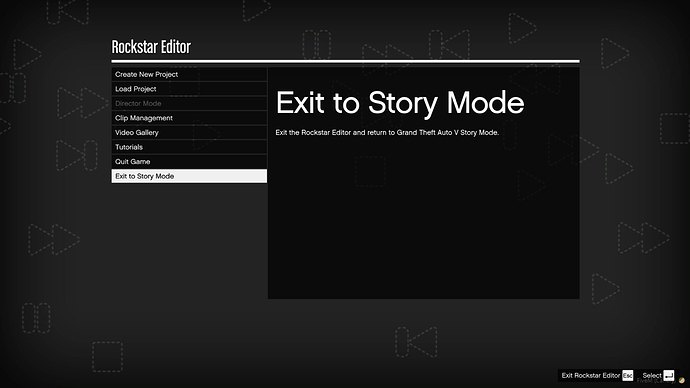 There have also been a number of improvements done to the user interface, starting off with a “Start” screen of sorts, with a background that might be a blast from the past to those who have played previous Rockstar Games titles. 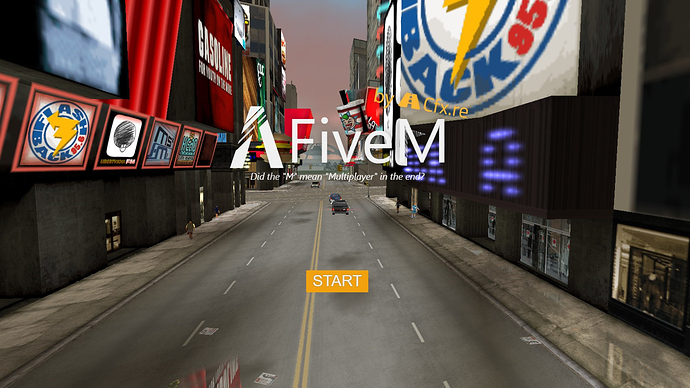 image1600×900 400 KB
Clicking start will bring you to the new™ main menu, which now has additional tabs at the top. It’s the same, but different!
Let’s go through some of them.

This allows you to play the GTA V story mode, but with all your FiveM mods and core engine improvements. Not just that, you can use your current GTA V progress by placing your current saves in %USERPROFILE%\Saved Games\CitizenFX\GTA5. That’s some neat stuff I tell ya. 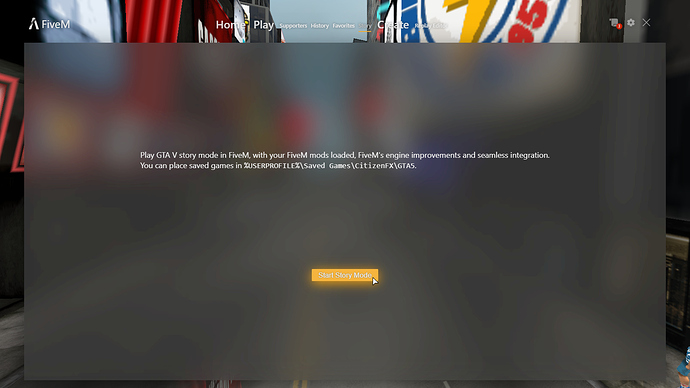 Whether you want to rent a pre-installed server, host a server wherever you want, make your own resources or contribute to the FiveM project, this tab will help you find out what to do next! 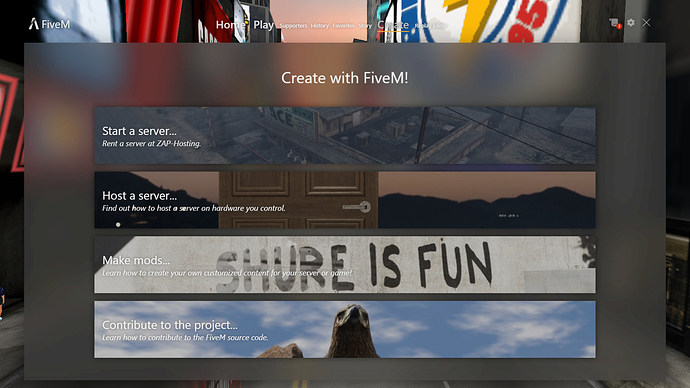 With the Rockstar Editor being implemented natively into FiveM, this tab will help get straight to editing your clips, wherever, whenever.
We look forward to seeing (and possibly highlighting!) the cool stuff you guys make with this. 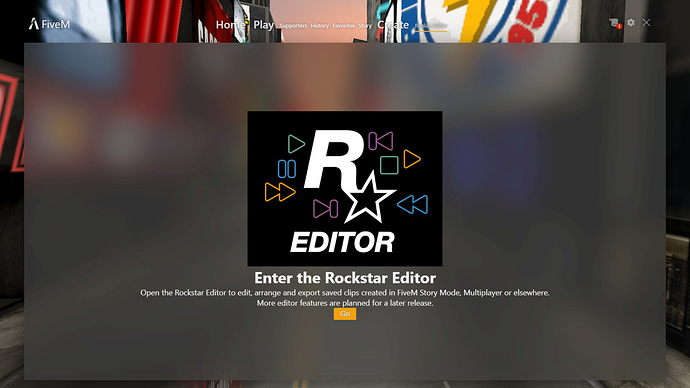 Now instead of being a tab, you can just click the little cog in the corner to open your FiveM settings.

Not just that, the settings now look way prettier, with settings being categorized instead of being all in your face. Ain’t that just lovely? 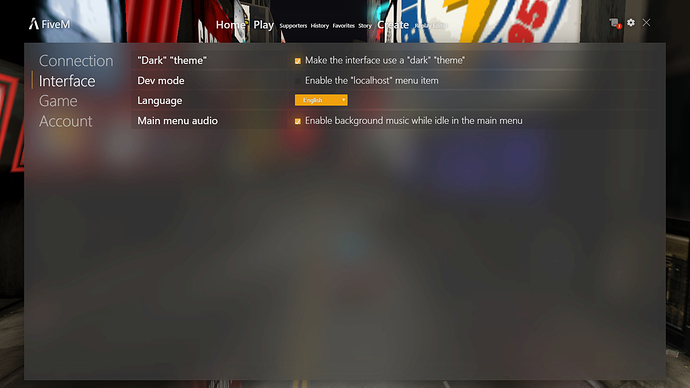 Starting from build 2524, another DoS exploit have been fixed - @deterministic_bubble explain that please <3

To improve compatibility FiveM now defaults to borderless windowed mode for new installs and there are some changes in the pause menu regarding graphics.

For you technical geeks, here’s a git shortlog of all the changes that happened in the past two weeks.

Without the Cfx.re community, both FiveM and RedM would not exist. Therefore, we want to highlight some positive and influential members as well as some cool new #development:releases and #fivem-snapmatic

We have a wonderful community who love to help us improving both FiveM and RedM, so here’s a little summary about what these lovely people made this week!

Release of the Week

Some may have heard of it already but ExtendedMode, a community fork of ES_Extended from the ExtendedMode team, has been released on the forums!

ExtendedMode By the ExtendedMode team Version: 1.0.0 Description ExtendedMode is a fork of es_extended, created for backwards and forwards compatibility but, probably even more important! It’s made to create a stable and neat platform for the future of FiveM roleplay. Many of the contributors to ExtendedMode come from a background in creating RP servers or making resources in general. We’re a group of experienced developers and welcome anyone that wants to make a contribution to ExtendedMod…

[img] FH4Map Forza Horizon 4 Minimap Note: This minimap is a client mod, you need to install an addon in FiveM client. Download v1.3: Download v1.3.zip Source: https://github.com/kasuganosoras/fh4map Installation Copy the fh4map folder to your server resource folder Copy the CircleMap.rpf to X:\<Your FiveM client path>\FiveM.app\addons (Create the folder if not exists) Add start fh4map to your server.cfg Restart your server Edit help This minimap is make for my server, so ther…

Snap of the Week

We’re always pleased to see the snaps you guys send using FiveM Snapmatic, here’s the two we picked this week!

For the first snap this week, we have @AODeltaB showing us the beautiful benefits of joining the Epsilon church!

Just be careful if they start asking for too much money.


Meanwhile, we have @Smallo here showing us how active the Los Santos nightlife can be!

I wonder what they’re listening to.

Got suggestions or feedback for the Community Update? Let us know

See you next week!

You guys truly did an amazing job with all these new features! I hope we will get feature to record aswell soon cuz not a lot of servers accept LambdaMenu. However, I really appreciate all your hard work!

Just curious why direct connect was removed and if it will come back? I know you can do it through the f8 console unless it falls under history?

Starting from build 2524, another DoS exploit have been fixed - @deterministic_bubble explain that please <3

The DoS was, as far as I can tell, utilizing fake authentication requests.

Just curious why direct connect was removed and if it will come back?

It still exists. You can “direct connect” through the history tab or the server search bar.

Should probably have added that to the UI changes bit, now that I think about it.

Ah gotcha. History seemed like it was just past servers that you connected to didnt even think to click on it. Thanks!

I’ve been in love with these recent community update posts, thanks for all of your hard work for the community. Thanks fellas.

txAdmin also got its most requested feature ever (after dark mode), but whatever…
https://i.imgur.com/1vxWFZW.gifv

Ayy yo, someone let me know when you fix the Anticheat.

I’m still hoping one day we can have modules we can add for framework support.

Any news on game build 1868, I’ve seen that it’s not recommended to use but haven’t seen much information on the status of it. Is it still something you guys are working on?

Of course! We are planning to update to the latest DLC once the next one is out. Until then, build 1868 is generally fine.

Great news and updates! We really appreciate all the work!

When it cones to R* editor, few other guys, including me, have been asking about possible support of Extended video export plugin for GTA. We are unable to use FiveM footage inside GTA’s editor anymore and can’t use plugin mentioned above with FiveM, as it crashes FiveM at startup.

Deterministic Bubble replied that it was working for canary testers, but there is multiple people probably using wrong. Because it wasn’t working for anyone in my previous thread. Could we get bit of advice how to do it properly?

I see you are doing a lot of work over there!
Sometimes nonetheless I wonder if you have priority on the desync issues still out there. Like, don’t seeing other players when connecting or stutters (especially seen when driving in a car as passenger).
Even when some may say this happens not very often, it does and it is a bit disappointing, that the sync with other players isn’t smoother.
It would be really nice if you could tell us (as player and especially developer), if you are working on this issue or if we could just discard our hours of work, because this will never be resolved.

You have done great work to this point, with enabling developing scripts with ped handling and a lot more. But the small issues are reasons enough to not use your mod (and therefore none of the existing GTA5 mods unfortunately).
Our server project started because we dreamed of a orginial and purely selfmade MMORPG-like server with a lot of fun coop PVE, but as it looks we will stop it again (even with working Conquer the flag missions, with fighting Peds), because of the non stopping sync problems.

Please give us hope! Tell us you are interested in fixing bugs and improving sync! This is a multiplayer mod, sync should be everything!!

Absolutely! Keep in mind that we utilize the game’s native networking abilities, which greatly benefits synchronization already. Doesn’t take away we continuously improve on sync where we can. While sync is generally great, feel free to report issues like disappearing players here on our forums - if you can attach steps to reproduce (preferably with a basic resource too!) we’ll be able to harden out these issues more effectively

I encountered desync issue with FiveM stock ressource on a brand new server and on any server I was launching from my computer (with many server build).
We were 3 players during tests, every tests results in a different desync issue (most of them was player invisible, michael skin, rare case: 1 player was invisible and doesn’t see population and cars and was falling through the ground sometimes).
I shared my server folder to another player, and 0 issue at all, back to my computer, desync were back.
So when you ask for a repro and people reply “just launch a onesync server with 2 players you will see” and you can’t repro, it mean it is maybe related to computer itself ?

So when you ask for a repro and people reply “just launch a onesync server with 2 players you will see” and you can’t repro, it mean it is maybe related to computer itself ?

If I remember I restarted once without solving the problem, at least ressort I have updated Visual C++ Redistributable 2019 (it was not outdated but was not lastest) + reboot and no more problem
I don’t think it was related to vc redist as it happen (rarely) on linux server.
To be honest, i didn’t understand why i had these issues every time this day, whatever I was trying, as I usually use cl2 on this computer every day without any problem

The next GTA online DLC is releasing in 3 days (11th), so we should expect the casino DLC soon?