This custom menu is used to control your vehicle and all of its aspects.
This menu is mainly used for servers who do not want vmenu but do want some of its aspects such as vehicle options.

You will need to install NativeUI to use the menu
Link: [Release][Dev] NativeUILua 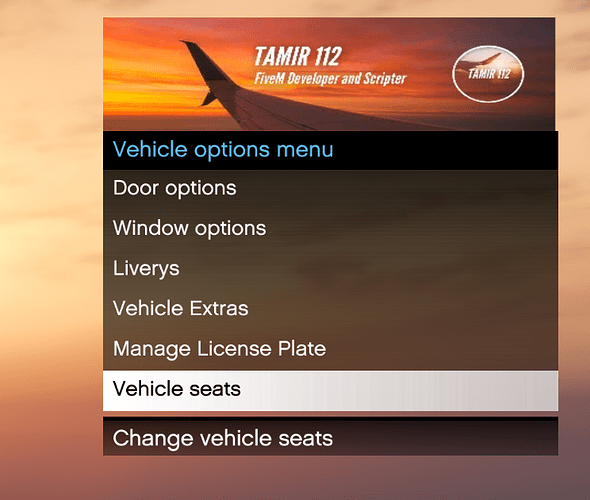 Nice script, works great. But DANG that formatting is killing my OCD. LOL.

No seriously though, the script works great. Thank you.

does it work on emergency vehicles

is there a way to remove the keybind option and just have it with /carmenu ? keybindings are prime real estate , is there a section of code to delete? or what about “none” in the local keybind = 170 area, i guess thats a general question too if there is something that can be put in those type of config areas

set it to 360 and it will disable the keybind option

yup, works with all the vehicles

Is there something like a openmenu trigger so I could use it in krz_personalmenu?

i love you thank you!

I love it , i want it , I needed it, its working great, But I need the manage License Plate Option Removed, everything else is perfect. I tried looking at the code and see if I could just remove a section but did not have much luck with it, thanks again for all your help

nice script but can add for admines on the next update patch instead of for all players?..

I will be releasing a new patch soon in which you can configure it to you liking, might wanna follow for that!

That would be an issue due to the fact that some people use discord perms, some use steam perms and some use different APIs for staff meaning I cannot make it for admins only.

oh yes if i could double follow I would ! thanks again for the reply!!!

I would just like to see more features. Such as; door lock, engine toggle, maybe lights.

Will think about adding some more things for V2

How would i change the banner at the top ?