With Valve’s Proton integration in the steam client, GTAV runs flawlessly and Online works too! (For more information about proton,please check “protondb” or its github.)

Unfortunately the FiveM client doesn’t work well with Wine or PlayOnLinux and its very unstable if it actually launches.

Is there a possibility there will be a native Linux client available?

While never a hot topic, it was discussed in some detail here:

Hi all… I’m one of the Oddities on the Net. I actually use my Linux System for more than hosting servers. I actually game on Linux, We have a nice Steam Client. I know there are others out there… how hard would this be to port to Linux or SteamOS?

Your information seems like a valuable addition on the discussion.

I believe its quite feasible, with dxvk, it translates DirectX 11 and 10 to Vulkan, which is supported on Linux and works well with minimum performance impact.

It’s not high up on the list, but it’s been looked at recently. See

Interesting, It would mean a lot if they actually make it.
Will keep an eye on it, thank you.

It’s not high up on the list, but it’s been looked at recently. See

This has been for renderless automated testing, completely unrelated to playing the game.

It’s also impossible to do this for the actual game until DXVK supports shared resources.

anyone get this working on linux?

No, and it won’t happen, ever.

Working on compatibility on https://github.com/PhoenicisOrg/scripts/issues/914

all explained in the issue, looking for help with ROADBLOCK 03 to create compatibility for phoenicis (PlayOnLinux5) 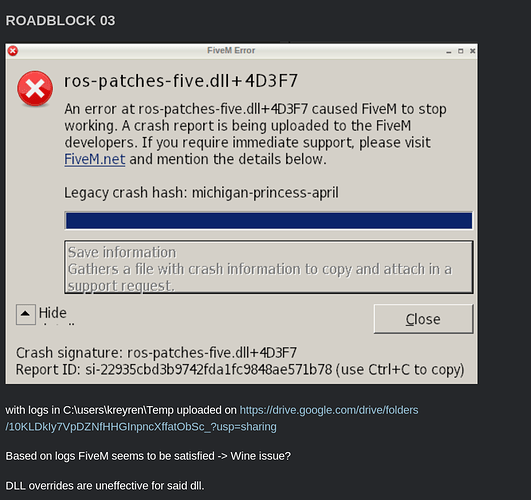 Elaborate why? Note that Grand Theft Auto V works OOTB on linux with performace supperior to Windows in some cases

Any timeline on shared resources? :)

earlier today a few more crazy requests came so we tried to implement a workaround, but moltenvk does not support running dxvk yet so macOS was out of the question, and linux does not support thunderbolt on mac mini 2018 yet either, so said workaround wouldn’t have been able to be tested.

Current issue is with

Can you confirm that this is caused by the lack of shared resources function in DXVK?

What does your Thunderbolt support have to do with the game?

In addition, Linux provides Thunderbolt support (see https://wiki.archlinux.org/index.php/Thunderbolt)
It’s even better than Windows as you can see.

What does macOS have to do with Linux, except that they open-sourced CUPS and it’s made for UNIX, so we can get use of it? macOS doesn’t support Vulkan AT ALL and is NOT planning to ever support it.

What does your Thunderbolt support have to do with the game?

Testing code changes for compatibility, if you managed to read the post?

In addition, Linux provides Thunderbolt support (see https://wiki.archlinux.org/index.php/Thunderbolt)
It’s even better than Windows as you can see.

Except it doesn’t work on newer Apple hardware, even with a patch from the 5.2 branches that’s meant to enable this, and said Apple hardware is the only desktop-style system I have access to at this time.

macOS doesn’t support Vulkan AT ALL and is NOT planning to ever support it.

And again your inability to read shows, this is what MoltenVK is for, but the work to support the required feature set for DXVK to run is unfinished. Since Wine and DXVK are the same across platforms, this’d have made it possible to test code changes under that platform as well.

As it is now, there are a few more hurdles breaking FiveM under Wine/DXVK other than the ones you people already ran into, namely: Still a long way to go in compatibility changes to properly work, not sure if ever workable enough for public usage though.

Testing code changes for compatibility, if you managed to read the post?

Are we talking about the input method right? Or do you mean something else? Since i don’t see how is input method relevant to the software… If your macbook is unable to use any input you can always use rclone, rsync, etc…

If there is linux issue on apple device then file a new issue in tracker of relevant repository and share a link assuming that it’s the only blocker for this issue.

As it is now, there are a few more hurdles breaking FiveM under Wine/DXVK other than the ones you people already ran into, namely:
…

If there are issues with WINE then please file a wine bug so that they can be resolved including the one that prevents DXVK from supporting Shared resources and refference them here… We can NOT work on something that is not explained correctly!

Something alike would be a good start for linuxppl to reproduce your results, please provide instructions for wine configuration so far i’ve (and phoenicis community, thanks to https://github.com/suomilanittaja) deduced: