Hi all… I’m one of the Oddities on the Net. I actually use my Linux System for more than hosting servers. I actually game on Linux, We have a nice Steam Client. I know there are others out there… how hard would this be to port to Linux or SteamOS?

until Wine emulates the specific low-level DXGI APIs we use, not really possible, even if V might run by itself

Try to run the game it self with wine (by installing it with play on linux for example) and see if it work well, I never tryed gta on linux so I can’t really tell you if it’s smooth or not

That would be super if you could at least give it an look I know at least 3 others… who are interested… Tired of the BS games on windows… Viruses, Spyware, Malware, Bloatware.

dont download those things and it wouldnt happen lol either way FiveM isnt supported by Linux natively but Wine isnt all that great when it comes to running games… the performance hit is kinda poopy i wished there was better linux support for games as i too would use it over windows.

Although i havent had a virus in years because i dont go click happy and check whats installing before clicking next.

Sorry for the bump, but this was the first open thread that I found on this topic.

There is one other thread on this topic that was closed as duplicate and also noted that “GTAV doesn’t run on Linux.” However, as of today, GTA V runs (mostly stable) using Steam Play / Proton on Linux.

I tried to run FiveM using Wine, but it exited early since it detected it was running as administrator (as Wine does; I’m not sure if I can use a different user).

I would like to join RP communities like DOJ that use FiveM, but I don’t run anything but Linux nowadays and I don’t want to make a commitment if I can’t actually run the client and connect.

Would there be any reconsideration from FiveM maintainers for Linux support given recent developments? I am also a software developer and would be willing to contribute if needed.

Would there be any reconsideration from FiveM maintainers for Linux support given recent developments? I am also a software developer and would be willing to contribute if needed.

Impossible as long as DXVK/WineD3D don’t implement shared resources, as stated in the initial reply to this topic.

I believe he bumped because there was some glimmer of hope posted in that initial reply as well:

on a related note, +1 for experimenting a tad more.

running anything under wine sucks to be honest.

Wine sucks as a general rule but I run quite a bit under it with absolutely no issues or crashes. 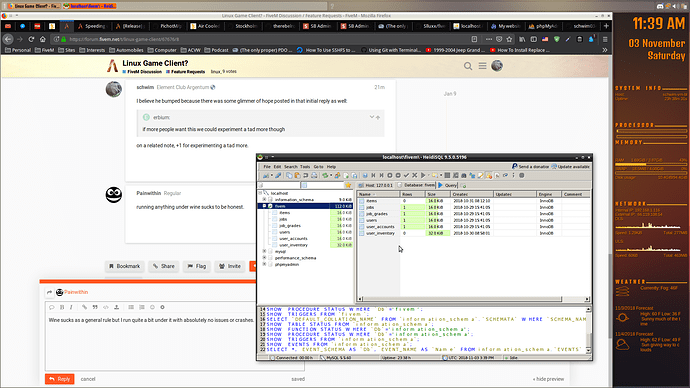 Valve has made their own fork of Wine/DXVK called Proton, which works quite well and with minimum hassle.
Check “protondb” ,they have a community catalogue of which games work.

Except they still don’t implement this required function, so that is not relevant whatsoever.

They do implement it, in the steam client named Steam Play.

This is the Valve fork. Note the API. They don’t implement it.

Does it still work tho? Just curious

Steam play aka Valve console.
They use OpenGL for their SteamOS stuff.
Since linux doesn’t really do much with d3d.

EDIT
Unless vendors (amd/nvidia/intel) create drivers specifically for linux to target hardware.
WHICH will obviously not happen in a good while.

GTAV runs great on my new computer with Manjaro Linux and the native support built into the new Kernel for AMD cards. I’m running on a Radeon VII and get 130 ish frames with max settings @ 1440P. I tried to get FiveM installed with WINE last night and it would install but can’t run due to “elevated priviledges”. Does anyone know of a trick to not run FiveM as an Admin or can it be run as an admin somehow?

please read the thread, gtav working was never the problem, its the way they access the files to mod them in real time, that doesnt (yet) work on linux as far as i know.

Any timeline on shared resources? :)

…and it seems like its not gonna be supported ever. heres hoping gta 6 is in gl/vk and not directx

Yes we do want this!