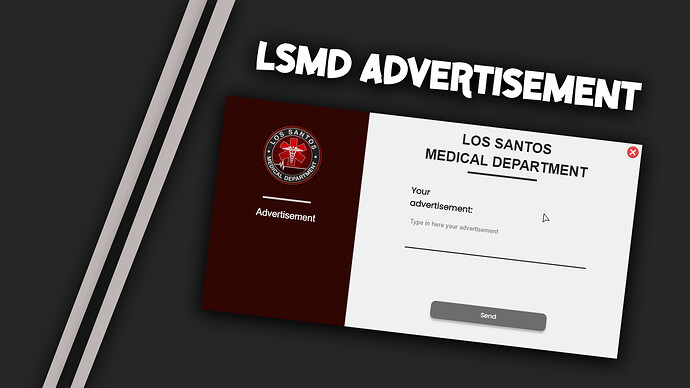 As in, it’s a leaked script? Or do you mean someone leaked HIS script? If it’s his, what’s it matter if he charges what he thinks it’s worth. I’d say it’s priced fine, I like the design of it so GJ Kefa, interesting idea

Why don’t you create one big script for all of your advertisements?
You could do so if a player has a certain job then append that job info to the html

it’s my script i don’t sell a leaked script tf?

I was defending you m8,

and yeah, any chance of you combining all the different advertisements into one?

Yes, i can do it. But it costs very much

How do you come to the fact that it’s leaked? This is complete no sense!

Is this encrypted or obfuscated at all? And is it possible to get it so it uses Ace Perms to send the adverts instead of ESX dependency?

You took your old PAID release Changed 2 Pictures and one Color and you chage people 10$!?

Hear me out, this is in no way meant as hate but constructive feedback:

Make a UI out of scratch, You dont even have a single free release. Maybe try to make up a fanbase/group that trust you. Before you start to shit out PAID stuff. Im not hating on you. i do like your release but ever after fivem allowed people to sell stuff the quality of things have dropped and people have just started to make stuff only for the money. This is not what fivem should be about. Its a community afterall and not a marketplace to sell stuff to other people. Help eachother rather than selling scripts <3