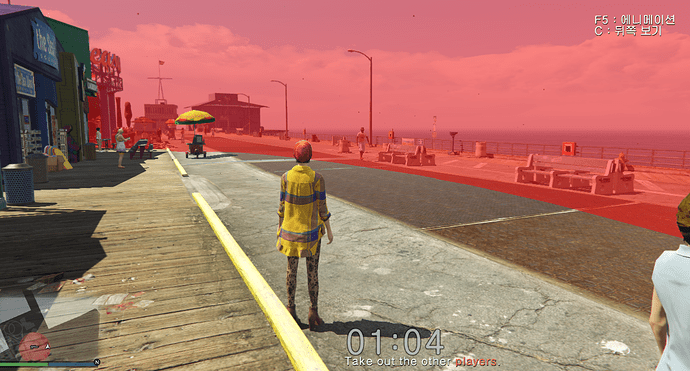 i made pubg style blue zone

nice does it damage you when the circle gets smaller?

im not good at coding idk how to do that

Here is a code I made for player who want to be damaged out of the safe zone : Add in in a new thread with while do true. Or in any existings thread with a while. (If you know how to not interfer with the code)

To make this mod work : You have to add this in _ressource.lua

Now I have to figure out how to debug the next zone swap. Cause it doesn’t work too.
[EDIT] : Ah ok there is only one zone. The next zone is the final look and pos of the first one. KK perfect ty.

Nice script bro I was needing somthing like that to win some time TY.

-To make thing easy to use… I noticed only after that the blip is in client side. The only weird thing is if you rejoint. The blip is again to the initial position.
This is bad in case of crash/bug/déco. And can lead into exploiting in case of real b.royal mod. May change value server side ?
-I can help you to do that … but you have nice math formula so I guess you won’t need me but :

I have no time

Ah. Another thing : but it’s now bug report. Sometime the map and minimap will be flickering for unknow reason(s)… Dunno where to look at for this.

First. yeah right its better that current, next coord radius is on server side, creatblip part is on client side. i’ll change it soon thank you for suggestion

Second. actually i made already code showing winner text and i’'m using that code in my project, but this resource’s only about safe zone (not battle royal mode). so i think people will make it themself

hello. Thanks for the release first but can you explain more on how to use (how to set the value and where can i input it). please

i started the script but there is no zone

did you call ‘brv:setCurrentSafezone’ event
can i see your code

What do you mean by call brv:setCurrentSafezone???

Dont expect me to know where do i put that im bad at coding i just download the script add it to the server.cfg and thats it

ah ok, but if you want to place safezone at where you want , you have to know how to use TriggerEvent fuc

put this code at end of “client.lua”