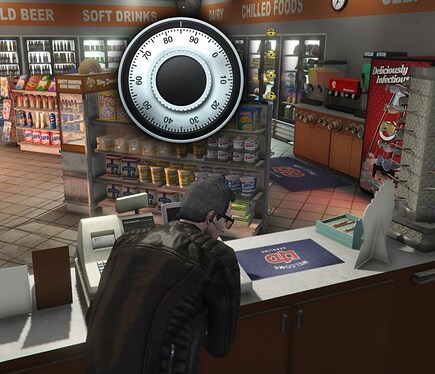 Dependencies: Mythic_Notify (The script is configured to this version however could be easily be changed if you know what to do) WH-outlawalert

Description This is version 2 of a script I have made to utilise pd-safe by MrFrk. The idea of it is to replace esxholdup with a more interactive method however doesn’t conflict with anything in it if you want to use both for whatever reason. It enables you to add spots to the map (Three different types, CashRegister, Safe and Vault) each of them have different random rewards (Which can be configured in config), different cooldowns (Which can be conifgured in config) and different amount of ‘pins’ to crack (Which can’t be configured in config but is easy enough to change). This also currently gives you two ways of notifying police with the requires alerts: Straight up name and location or send an alert saying a camera has been triggered (configured for st-cctv but this is not required as it is a script that has to be purchased) which you can choose from. The script conatins 3 stores each with 2 cash registers and a safe in the backroom. The pacific standard vault is also in there by default too.

The minigame is included in the file however I take zero credit for its construction.

Any other suggestions let me know!

How the Minigame Works

Use A and D to move side to side, W to select current position and S to cancel.

Hopefully this explains it better, I can make a video tutorial if you think it would help and be easier than instructions

@Danny3 for the outlaw alert. @MrFrk for the safe cracking.

It is yes. Just for the players, jobs, money and inventory I believe although if you know what you’re doing it could easily be changed to something else.

This lets multiple players at once crack one safe, is there a fix for this?

That’s something I didn’t think of. I have an idea so I will look into it. Thanks!

Is the resource named wh-robberies-v2? It has to be named that else it won’t work.

In What way doesn’t it work? Any Errors?

How do you change which keys are used to rob the safes etc?

If I remember correctly, there’s an option in the config

The safe does not come up…

You’re probably just using a different version of Mythic_Notify. Use the one linked in the ReadMe then it should work. Or change the event trigger to the one you’re currently running. (Probably ‘SendAlert’ instead of DoCustomHudText)

Hi ! When i confirm with “W” when i ear the sound, all time the script say: “Cracking Failed” it’s normal ?

Hey was there ever a fix for this? I find it is very common with a lot of scripts that offer a more elaborate way to rob stores. I want to use this but not if more than one player can rob it at the same time…