In loving memory of d0p3t

As some of you may know, last year, on September 17th, we lost one of our team members.
We did not communicate about it (except on our Discord guild) mainly as we were all too devastated to be able to write anything on that matter. It is still very difficult to write about it today, but we want to honor his memory.

d0p3t passed away after fighting against a very rare and aggressive cancer, which took the best out of him in only 4 months. He showed us an admirable strength through the several weeks he spent at the hospital, even in the saddest times.

d0p3t was a very active member of our community. He volunteered a lot of his free time to moderate both our Discord and forums, but also to help other members with their scripting or client issues.
He also contributed a lot to our ecosystem, first with his GunGame server, but also with the open-source repositories and resources he was maintaining.

Our deepest thoughts go toward his family and friends in these difficult times, we will always miss him.

We have recently pushed our new main menu to the ‘beta’ and ‘latest’ update channels of both FiveM and RedM, and we have taken in your feedback. If you haven’t seen it yet we’ve provided a full screenshot below but you should definitely check it out for yourself on the beta channel if you feel so inclined! 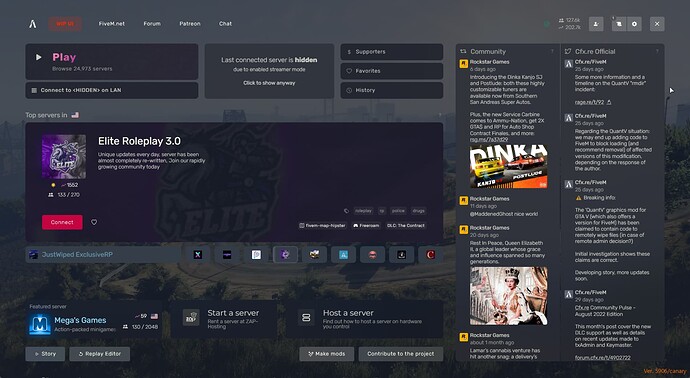 As always, feedback is greatly appreciated as well as bug reports however these can sometimes be missed when sharing them on Discord, the bug reports section of the forums is checked by our developers regularly and reporting bugs here will allow them to action these accordingly.

We would like to thank everyone for your continued support. Here’s to 300k more

We’ve also recently added support for the 1491 build, which will make it to the production channel soon™.

Last month, we’ve been the target of a very large credential stuffing attack on our forums.
This kind of attack is made possible using stolen email and password combos from popular website data breaches.
While we were able to mitigate most of the attack, it appears they were still able to gain access to some accounts.

We strongly recommend you periodically check have i been pwned? to see if your email address was included in any publicly known data breach. If applicable, please update your password.
Server owners are strongly encouraged to enable Two-Factor Authentication on their accounts as an additional layer of security for their accounts.

A set of further preemptive measures is being worked on and will be deployed to our services shortly to minimize someone’s ability to maliciously transfer escrow assets from a compromised account.

If you believe your account was compromised, please open a new request on our support platform, and update your password on all websites you used the same password.

This month we were informed that a popular graphics mod used by many members of our community contained a poorly implemented anti-piracy measure that was able to cause irreparable damage to users’ systems. After a thorough investigation by one of our developers, it was discovered that this graphics mod contained obfuscated code calling rmdir /s /q on multiple drives which would remove files that the user has access to read/write, which could be a lot. Development of this graphics mod has now been suspended and download links removed. A full timeline of events as well as some context can be found here.

As of the time of this writing, QuantV’s development has been stopped until further notice.

Version v4.18 of txAdmin has been released this month bringing various bug fixes and features, see below for a summary:

Features:
➤ Core: Added dynamic restart scheduler. Now you can schedule a (non-persistent) server restart, as well as see when the next scheduled restart is and cancel it!
➤ Core: Prevent the admins.json file from being modified externally;
➤ Web: Added the server name to the page title, small quality of life improvement for admins running multiple txAdmin instances;
➤ Web: Added a filter to the resources page to show only stopped resources (thanks CsokiHUN);

If you are running multiple txAdmins, the auto admin sync will not work anymore, but don’t worry because we will work on a multiserver feature soon enough.

You need to go to the discord developer portal and give the bot the “message content” privileged intent permission. We also recommend you changing the prefix from / to something else like !.

If I open a request on your support platform will I actually get an answer from a real person instead of an automated message? Since I contacted you like a month ago about my accounts having been hacked but I always only got automated messages.

Keep up the great work, you guys are the best!

We will never forget you dopet, rest in peace my friend.

very sad to hear about this, rest in peace.

Everyone is talking about the new UI, I didn’t know d0p3t but I want to send my condolences to everyone who knew him and his family.

Can’t believe it has been a year already. Rest in Peace.

It’s always nice to see improvements to the platform, and the UI is looking very sleek!

I’m sure d0p3t would be proud with everything that has been achieved by the team so far, and he will be missed, but definitely not forgotten!

I’d just like to say a huge thank you to the Cfx.re team and other contributors of the project for continuing the efforts to provide the updates and improvements we’ve been seeing recently - it has come a long way in the three or so years I’ve been a part of the community and I’m excited to see what the future beholds!

d0p3t was a real friendly and helpful guy from the few times I talked to him. I was saddened to hear about his passing. RIP

Rest in peace Remco, you were one of my best friends for a solid 10 years. Will always love you no matter what <3 Hope you’re in a better place.

I don’t have any faith in the cfx/fivem support system. All I ever get is automated messages. I’ve tried every avenue. It sucks

Doubt it very much. 7 closed tickets in as many days with the same automated response. It’s driving me mad

Also I feel so insensitive speaking about cfx support and my issues when there is a bigger thing at hand. Condolences on your loss to all the cfx crew xox

I remember going back and forth alongside dopet when he would expose people for injection paths lol.

It’s a shame he’s gone, he had nothing but the utmost respect for everybody who returned it and I’m proud to say that I knew just a bit of the kind of person he was, and it’s a shame that I’ll never be able to speak to him again.

Fly high, king. It was a pleasure.

the UI looks incredible. very nice work. such a shame to what happened with d0p3t, even if i didn’t know him. freak cancer.

As much the interface is very nice, nice work.
As much favored the servers which pay the boosts to appear at the top it is a pity in this way.
The rich always in the top list and the real good server to forget.

RIP d0p3t. He was such a great dude and great help to not only myself but the entire community. Hell if it wasn’t for him I wouldnt even be in this community any more. Condolences to his family. You will be missed!

That’s very sad to hear, we was a gem to the communities he was in.

Our deepest thoughts go toward his family.