Unable to join servers after the last update

After the last update of FiveM; I and every player on our server is unable to join any server in the FiveM server list. Is this a bug/mistake on fivem part on the update or do we need to update the servers also ?
Because i looked in the Artifacts list and we are still on 2430 as we are currently running.
Does FiveM still need to push the new Artifacts on the list for our servers or is this just a unexpected bug in the system and we need to wait for a update ?

Before the update i was able to connect to my server, I closed fivem and got the update.
After the update we all get this message.

Restart the game so you get the latest fivem update?

i have the same

Try deleting caches.xml, if that doesn’t work try switching to canary for now.

Deleting the cache didn’t work and was also something i tried before hand. After Fivem done a quick fixer up update it worked again.

But today FiveM updates once again, and once again there are some problems.
Does not matter what server we join, Fivem crashes every time when you are boating up in the server. Already tried deleting cache and reinstalled FiveM. 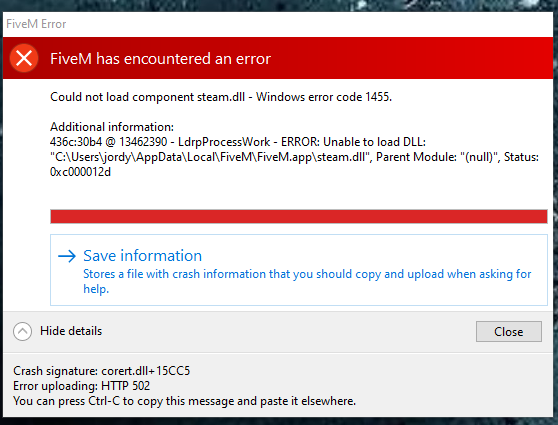 Now it’s the steam.dll, but often it is also saying some other dll files.
So gues we are waiting for a fixeruper gain

I am seriously not understanding what the heck the developers of FiveM are doing.
After every update they do it seems the program becomes buggier and buggier.
They should fix these bugs and crashes before they add in tons of new features, but fivem seems to do it the other way around. Now these days they even have slogans where of they are taking the piss with them selfs like “What is a crash” and “Hint: it was not worth waiting for”. I mean wtf man ? Why aren’t you guys fixing the foundation of the program first before adding new features in what just stresses the program out more. 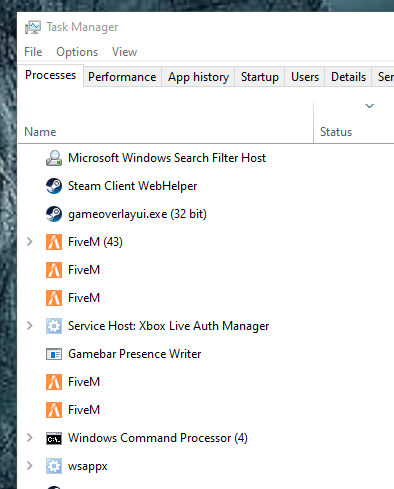 At the end i had more then 50 Fivem processes running on my PC, what obviously is crashing the program. The last update (hoping it would fix this) even made it worse again ~!!
I would say revert to a older version and push the update again once it is fixed, instead of
becoming a headache for developers to work with your API in the first place. There ain’t no developing if we are unable to even join a LAN server to keep working.

You guys drag in over $100.000 per month on patreon and a platinum tier ain’t cheap.
So please hire someone that knows what he is doing with that money. Because i find it pathetic that you ask us so much per month and we are not even able to use your program for something it was designed to do!!!

Hahahahahaha today i get a new update… Unable to join any server now… And now it also gives errors on my license, saying we dont have one.

FiveM developers… I seriously got no words left for you guys. This is seriously pathetic

Edit: When we switch back to 32 players we are able to load in the server. I also notice more and more servers seem to have lost the colors in the name, and the same problems i am having. The moment people drop out of fivem to restart and update, the headache starts again. Also i notice that FiveM starts 10s of Chromium subprocesses what makes FiveM lag out and give these spikes every couple seconds. Especially when you search the server list.

FiveM developers… I seriously got no words left for you guys. This is seriously pathetic

What? this is an issue with patreon services being down not FiveM developers