Maybe that’s something related to newer builds? I’m using B2612. 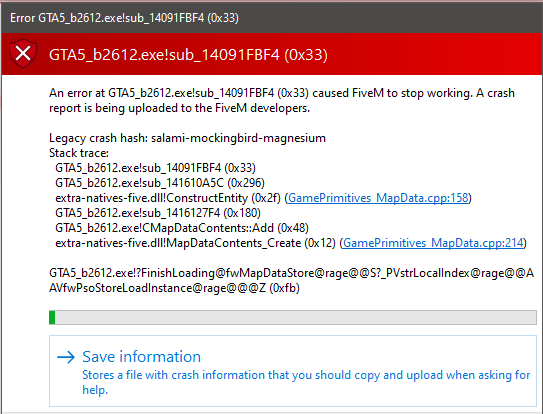 This does not seem to reproduce (anymore) with just the resource you uploaded on b2612/b2699 (on a clean server, with no client-side mods).

Strange…
I will re-test and see if something changed, or if this really requires additional content to fail.

Right, i forgot i was always spawning near the MLO. That’s why i got the crash right after loading the map.

Right, I can indeed confirm this happens, though not on build 1604, indeed.

This makes me wonder - if a cache file is created on a lower build containing CInteriorProxy entries, it could be the case it contains an interior proxy index which possibly conflicts with a manually-set proxy index in a R* DLC in a higher build… which could have a few different approaches in fixing this. that’s not the case, interior proxies get allocated the usual way, so it’s rather the case perhaps the interior proxy fails to be created but since the mapdata file is marked as cached it’s not running the load-time creation either. Probably a plain cross-build bug, then.

Probably a plain cross-build bug, then.

The pattern for ‘save’ and ‘load’ is the exact same for b2545+, pointing to the save function, not the load function.

Seems like there’s more problems regarding .dat files crashes, but the repro i provided before are actually fine now.
I’m currently investigating what is going on when trying to use “save_gta_cache” .dat files in a resource which i have various MLOs inside.

After some long hours i finally could narrow down the problem into 2 specific MLOs.
Trying to reproduce the problem with only one of these MLOs don’t cause the infinite loading issue.
I don’t actually know what exacly is wrong with these two (i tried some changes, but had no luck

).
For some reason when using generated GTA cache with them, the game get stuck at infinite loading.

During some attempts, i got something quite different, but was before completing the new repro resource:

I’m here to confirm the CacheRepro2 is reproducing the new problem in the B1604 too. So it’s not exclusive to newer builds.

And i had to re-upload the CacheRepro2.rar file due to a typo not letting the problem reported to happen.