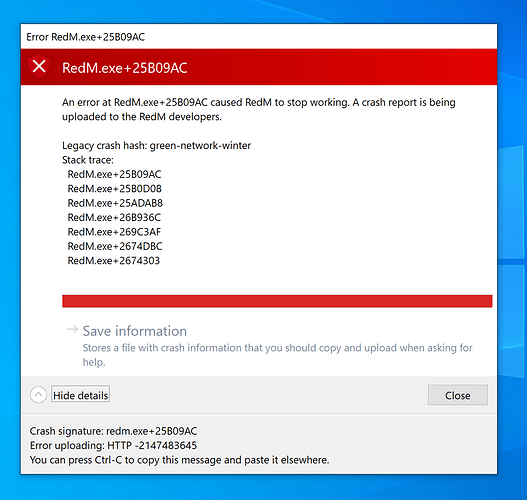 What did you do to get this issue?
Went to load up RDO to attempt to play RDO for a bit, began getting GFX_State_Error (which now pops up for RedM)
What server did you get this issue on? RDR2 Base Game / Wild West RP
Latest CitizenFX_log fileCitizenFX_log_2020-10-17T161231.log (127.3 KB)

Also add what you already tried so far.
I was on the phone with Alienware Support thinking it was a video card error, nothing found, was on the phone with Rockstar support, bounced around between five people who would not listen to me when I told them I had already done everything that they recommended and what they were telling me to do, while still doing it.

Wiped computer entirely to factory restart, reinstalled Red Dead, same issue. Removed sga vulkan files, same issue, lowered graphics to pretty much silly putty on horseback, same issue. NEVER had this issue until I began the naturalist storyline in RDO. Was able to log on for a little while, but it still throws that State Error.

Nothing is fixing the issue between RDR2 and the State Error and I’m pulling my hair out because it seems to have occurred the moment I actually wished to play the base came for a bit before logging into RedM.

As a note as well, because the Rockstar Support after 4 hours decided to go “graphics card not supported lol bye” before he read my response - This issue has NEVER happened before. I’ve ALWAYS been able to play the game at the standard settings until now.

I have similar problem but not init any server

Any fix? I am as well experiencing this.