I set up a server using TxAdmin and I used the Plume ESX Legacy template. When the server launched, there are two icons that have no labels. I have the same problem on my old server, and I have no idea what could be causing it on this fresh template. Any ideas? 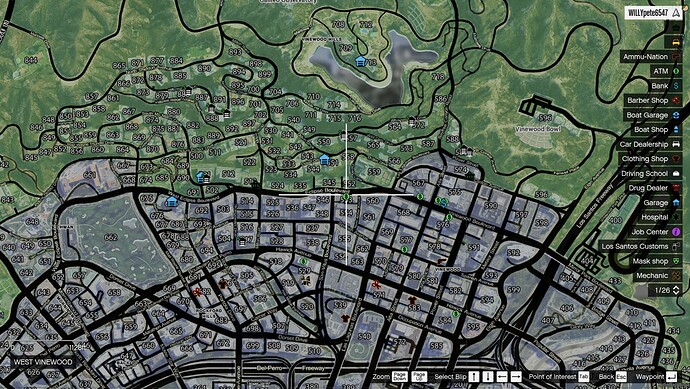 Yeah, those two icons are a store and the taxi job. I had a similar issue on pretty much all of the built in jobs, They were not pulling the variable for the name. I do not know enough about ESX to fix it the “right way.” I just beat it into submission with a little hack. I manually changed it in the client files instead of having it call whatever variable it was missing.

And for the ones I could not change in their client files, I removed them and made my own blip file. It came in handy when I started adding other points of interest to the map as well.

Yeah my solution was creating the blips in a different file, but eventually even one of the blips in the new file started losing the labels, too. I have no idea what could be causing it.

So after some testing I found out that the problem is in esx_holdup. I removed the script entirely and the labels come back. I don’t know exactly what the problem is with it, but if someone else want’s to find out please be my guest.

I found out that the problem is in esx_holdup

Removing that resource fixed all of the issues? I saw the taxi job blip was messed up in your original post.

I hope so, I don’t even use esx_holduup. I can lose it.

Yes, I removed the script and both the shop blips and the taxi job blip labels came back. However, I have a new issue. I added Legacy_Fuel and there are no labels for the fuel stations; just the icons. I’m working on re-writing the script a bit to see what I can do. But if anyone has a fix, please feel free to share.

I have noticed sometimes after a server restart some blips just don’t come back with labels. They are pulling this info from ESX and I think that they are not “filling in the blanks” all the time. This is why I was skeptical about esx_holdup being the choke point. What I do is edit the code, removing the variable entirely. Or just restart the resource in question. It may be useful to move anything that generates blips that pull info from ESX to start last.