ESX & QBCore Fireworks
This modification was made solely due to there not being anything like it. I have created a script which used the models and animation that were given to players in regular online in 2014. These features never returned to online but remained in the game files, so I brought some use to it!

Report any and all bugs in the comments. I plan on updating this!

“qbus” I think you mean qbcore.

Please make a locale to edit the Text

Will do, should be done within the next few hours. Just need some time to get on.

They are added, only to the QB Core version for now.

i need it for esx

Will do give me a few 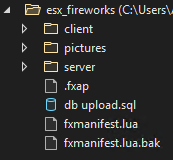 Don’t get me wrong but I think this is already available in qbcore.
Maybe it’s different, of course, what you did, but I just wanted to say it.

The Fireworks in that script aren’t optimized and focused on like in this script. I plan on solely creating and updated just the fireworks mechanics with my script. It is a good script though, I have never seen it before.

My bad, should be fixed, I never uploaded the locales with it.

Okay where can i put en or fr? both locales are obfuscated m8

It should work. I don’t know why it obfuscated the locales.