I’d like to add the IVPack, Dispatchworks Pack and VanillaworksExtendedPack to my FiveM server. All 3 are huge car packs with 50-150 cars and I couldnt spawn any oft them. I watched YouTube tutorials and read threads on how to add cars to a server but no one used a car pack like this. I did this with a test mod and it worked (I spawned the working car on my server). I have absolutely no idea what the problem could be. After 2 days of looking for helping stuff I got tired of all that and I hope someone had experienced that issue and maybe solved it. I know it must work because the Project Homecoming server uses the IVPack.
I hope someone can help me

I found I had the same Issue with these packs, have you made sure you are using all the meta files that are provided? As for me it was the fact that I did not include the dlctext.meta file. Which when it was missing was causing my game to crash on spawn of any of the vehicles in Vanillaworks Extended Pack.

Note
Some of the vehicles in the packs will just not work for FiveM so make sure to go through and weed them out before putting them on your live server.

Yeah that was the problem with the .meta files. But for me the cars just couldnt be spawned on the server. How do you know which doesnt work?
Im experiencing a new problem now cause the cars dont have any modifications beside colour and neons. I read something about modkit ID’s and stuff like that but now I can ask someone who uses the IVpack too :D.

did you add the mod-kits files that come with the pack? They are meant to be placed inside the stream folder.

Im not sure there were any modkit files in the mod. Im gonna try that tomorrow and Ill let you know. But you did download the mod on the same site? 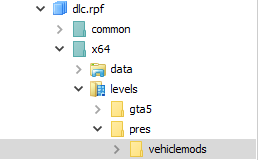 Inside those two folders, extract the files and places them in your stream folder