I followed this tutorial to the T and when i tried to join my server it just froze. Wasn’t freezing before i added the car. I’m trying to add this car, and I did exactly as the tutorial told me, and when I go to join my server, I get my regular loading screen, and it goes through everything, but then I look over at my server console and it says I’ve disconnected. Tried to join multiple times. Client doesn’t crash, just stops doing anything. I waited for about an hour and then I was able to connect. Now it just sits loading forever. Literally asked lambda to spawn it after setting up a bunch of other stuff to be able to roleplay, went and roleplayed for half an hour and the car never spawned.

TL;DR: I tried to add this car as an addon car, by following this tutorial, and I followed the tutorial exactly, and the car simply will NOT spawn, just freezes lambda.

Hello, This is a thorough tutorial on installing add-ons with vehicle mods, etc. [IMPORTANT INFORMATION] Before installing add-ons, you need to make sure the .YFT files are below 16MB. If the .YTD file is oversized, you can lower the resolution/quality below 16MB so the texturing will not be glitchy, and will be formatted on the vehicle correctly. Make sure you put the vehicles+vehicle modifications in a stream folder, you can organize the vehicles, and the mods through seperate folders. Ma…

I tried to install addon cars to the Vmenu and every time it says resource could not be found. I included screenshots of all the places I’ve put things in to try to add them in but had no luck. let me if there’s any more info you would need to try to help me. THX 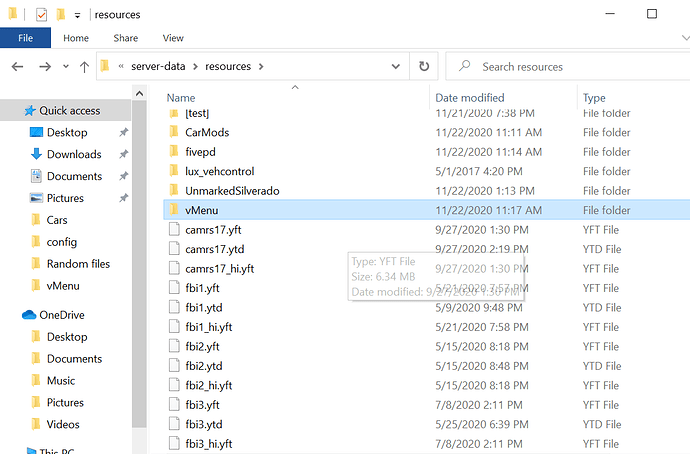