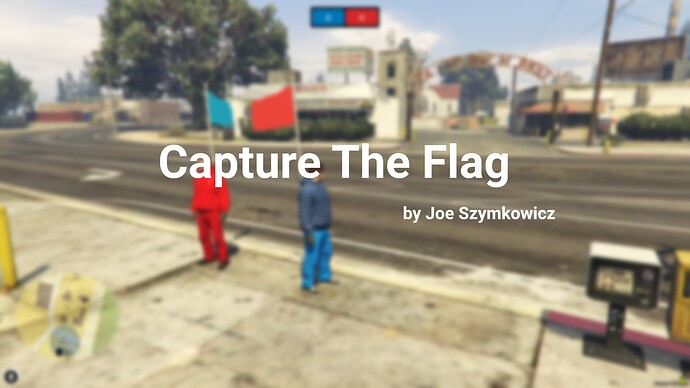 This is a Capture The Flag game mode for FiveM, with custom flag props and customizable rulesets. Two teams fight to capture each others’ flag.

ox_lib
assets_ctfflags - These are the models specified in the existing game config. I guess you could technically use any other model in FiveM, you would just need to specify them in the game config.
qb-core/qbox/ESX - When autoRespawn is set to true, the script calls the revive event compatible with these frameworks. Compatibility can be expanded to other frameworks if someone wants to do a PR or send me the event names.

Capture the flag and win

This is so goood!! Good Job Joe!

This is a very good idea! I like it

nice work and thank you very much

yo JOE!
Dope free release, and esx version! Super awesome, thanks for release!

Amazing work Joe, Love to see this gamemode released for free. And uses svelte for the UI

@SnipeOPGaming is actually the one who did the scoreboard. Did a great job on it and didn’t want a credit for it. He’s too modest.

Added powerups to the game. Currently only Haste, that temporarily increases the players sprint speed.

This is awesome but is there any way you could add an option to pay the winner?

Yes, I’ve conceded that I’m going to have to add some framework integration to further implement the enhancements I want. I’ve already started working on some changes set to push soon. Keep an eye on the github this week.