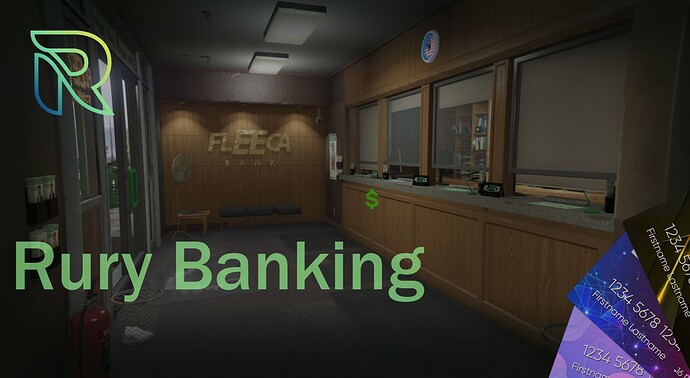 To embed a resource on your server, you will need to replace all the previous functions with bank accounts and change the paycheck script (examples are in the readme file)

just curious to know where the payment history is saved like?

To avoid spam in the database, there is a time limit for each user (15 seconds) after each banking operation.

Great Concept and Script.
A suggestion from me would be to add a Bank Job to this system.
Blocking a Players card. Accessing the log. Changing their account money and …

Thanks for your suggestion, I will try to do it in the future

Also does it support Multicharacters

Script is not encrypted and is fully editable. If you have a need for money as an item, you can change the function in the code (I use: xPlayer.removeMoney(count) and xPlayer.addMoney(count) for cash)

Great script, been looking to change from my other banking script due to a lot of API downtime. I’m guessing you do not use an API.

What about crypto? I’m running qbcore

You are right, I am not using the API
I have an idea to make a crypto, but it will take time. Since I want to make the whole crypto mining and trading system

To get an updated version, please contact me with your Transaction ID.

Hello, how can I change that every ATM object in Los Santos is functional instead of the ATM coordinates? Means there are no more coordinates for ATMs but certain props are activated.

You are not the first one who asked me about this, wait a little, I will release an update with this today

For Previous Purchasers - For an updated version, contact me on Discord

can this work with cash as an item ? -qbcore