Can we upload customs jobs for leaked QBUS on the release forums?

I created many jobs of QBUS can i upload it ?

No we are not going to allow jobs for some leaked server framework, stop using leaked stuff it’s rude.

Convert it to ESX → Release it.

It was recently made it public by the Main Developers. Is it still not allowed? QBCore Framework · GitHub

thats not called public , first it was leaked and 3 times then after that they have uploaded publicly.

Still we cant use qbus

EDIT: They claim in their readme that KASH and s0me1 gave their /are giving support, not sure wether or not this is true since that ins’t the original repo from KASH.

well there is no proof that those REPO’s from Github are legit.
any anonymous user can register a KASH username to pretend a DEV of QBUS.

unless they have a backed logs commits history from github to show here (original development logs).
so it can be legalised here.

else
any QB core you can find in github are just a leak framework.

The KASH github is linked to his Discord profile, wierd to have a fake github of yourself connected to your Discord, wouldn’t it?

not enough proof,
if you are willing , start a petition to allowed qbus here. so mods and cfx team can make qb core legalised here

Why would I, I frankly don’t care that you’re not allowed to release Qbus modifications, I personally know that this is KASH’s GitHub and he released it…

If they don’t believe it, then sure they don’t, afaik its not ‘against ToS’ to use Qbus, if it would, I would be suprised…

I have personally asked the framework owner s0m1 and he quoted me 200$ for tb-framework (at that time. Early 2019) and so I don’t think the owners / creators of framework were thinking to keep this framework private.

But I don’t know how fivem moderators can proof that qbus is released by real developers and not by some fake people.

I seriously think the public GitHub is a ripoff. Their discords are constantly sharing paid scripts for free. And their reasoning is “We are just converting the scripts from ESX to Qbus”.

Also top creators like CodeDesign were also found talking about releasing scripts that work with Qbus. If FiveM Moderator’s are seriously going after people selling things based on leaked framework, they seriously need to contact CodeDesign and their recent announcement towards giving support for Qbus.

Whatever is there but forums and me still agree that qbus is leaked and we should not use.

Of course your allowed to use it, the owners have made it public.

No matter if its a framework or another script, you can release a script which has been coded by someone else / claiming that its yours.

the framework is released, open-source and maintained completely with almost 2,000 users

It has been released on my GitHub, original repo has been private cuz of non-sense commit logs. 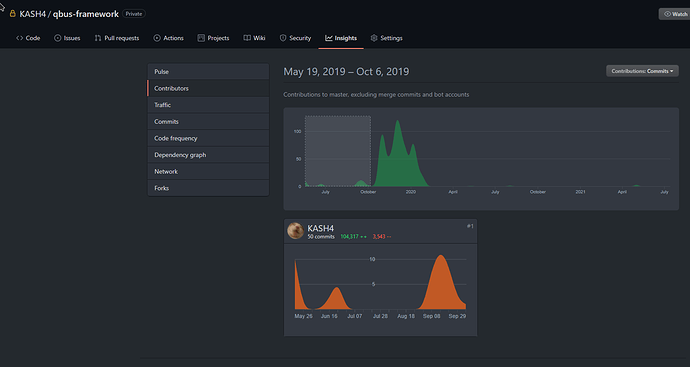 Started the project in May 2019, was leaked around Feb 2020. Don’t care that anyone uses it, I like that people create resources for the framework.

Case Solved. Not leaked but a friendly community that helps each other. Not like some other framework cough cough