Hello all, our server has hit Alpha development stage, and our big 2.0 update is now Live. We are working to be a great place for serious/hardcore RPers, Server is located in USA. We have many things in the works and currently looking to bring in some more developers to the team. We also have open staff positions, & deputy. This 2.0 Update comes with tons of bug fixes, optimization, multi-character support, new clothing and a ton more, our discord contains all our patch notes, and content. We also have a trello that shows things we are working on and future projects. Things our server has so far this is only a short list and not everything:

And much much more. Come check us at on our discord if you are interested, id love to hear your suggestions, and this server will be a place where all good rpers can call home not having to worry about things most deal with in other servers, such as staff abuse, meta gaming, or cheating. We do not tolerate any type of abuse even from the founder of the community. Everyone is held accountable for thier actions and every member has a voice in how the server progresses such as proving feed back or suggestions for the server, no one is left out of the loop on anything and will eventually grow to be a great community for everyone. Our discord can be found at: https://discord.gg/dCbfj6AhJ8

Looking forward to seeing you all in the server soon. Hello
i Just would like to say this is a Great Place to have Fun!
Even Though its in Development i was able to get Assistance with your staff immediately and they was and very patient.
if i could give this a 5 Star i would.
and i was first reading the post and I am Excited to see what comes to the Server
i personally want to be a Western Union man/or Pony Express i am Excited to see what you all have to offer.

Working on custom ones everyday, some are public yes, but this server is not live at the moment, hench why it says [In Development]

Is this voice RP or text? Not really a fan of voice rp cringe levels too much.

Most Red M servers will always use voice, i dont have plans to make it a text only server, yeah voice can induce cring sometimes but it all depends what kind of roleplayers you have in that community, if your community consists of good rpers then voice RP is one of the best RP experiences you will ever have. But , there is rules in place and staff will handle accordingly.

The discord link seems to be expired here, unless this is a lost cause or not around anymore

No we are still developing @MafiaBorn , we are now in alpha, Old Western RP has Merged with another community to improve man power and bring on more help and devs, we are now called WCRP and we can be found here, https://discord.gg/Kmam3BW We are using the same discord but re branded with a new name. I just been so busy with developing I havent had a chance to update this post yet. We have progressed tons and we now are close to launch. We got fully functional train, a in depth crafting system that is player driven which makes a realistic economy system. Where players will trade amongst each other for goods. We got woodcutting, farming, a full cooking system, moonshine, fishing, farming, fruit farming, chicken coop gathering, mining, full character creation system, very detailed stable system, just to name a few, there is a ton more but its alot to type out. We also run on VORP C#RE which is a C# framework, which runs better and smoother then a Lua Framework like RedMRP

Also NOTE if you join server, this happens on any server. Please make sure your graphics card supports Direct X 12. For some reason Red M likes to put Direct X 12 as default graphical setting instead of Vulkan. If your card does not support Direct X 12 you will crash. You must go into red dead single player and change manually there. Only Cards above 980 support Direct X 12

Come on in Guys!, Testing is ready for you to enjoy, REMEMBER Alpha Stage is buggy. Report your bugs and get rewards of some kind!!!

Hey folks! WCRP RedM Director here! Just letting people know that we are still here and still updating the server every day! Take a minute and read the OP to get all the info you need to connect to our server!

P.S. We no longer require saltychat to play on our server!!! Woohoo!!

Check out the WCRP RedM community on Discord - hang out with 78 other members and enjoy free voice and text chat.

Howdy Cowboys/Cowgirls I want to let everyone know that coming to this server we go up and beyond here make your Fantasy to reality If you want to be lawmen, farmer, a Crazed Gold panning country folk, Done! if you want to be even a city slicker working in the office of a bank we are working away to bring that and much more
Here at WCRP, we like to bring players together and give them that White Collar Experience to bring you Great Content in-game!
so come on down to this here Frontier and Grab yourself a whiskey in the local Saloon and develop your Story with us!
#WeNotMe 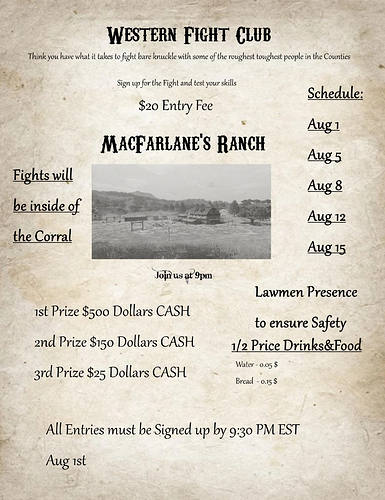 We have reached over 130 members in only 15 days of alpha, banking is coming very soon, along with fishing that is just like the red dead storymode where you will be able to see each fish you catch and either keep it or throw it back into water.

Some more pictures of some of the content in our server, banks released today in current alpha, things are progressing very well and more updates and content to come in future.

Weaponsmithing is now a thing at WCRP, still in development but coming very soon with tons of other features, this will be a WL job that players will be able to do. And some weapons will be craftable without WL as well to be fair for all players