Lockpicking adds a custom never seen before car lockpicking minigame to your server. 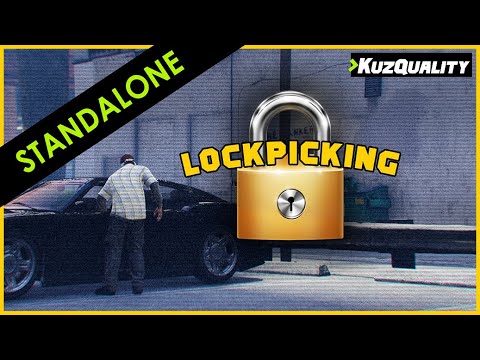 Everything included in this script is customizable and can be turned on or off.

To unlock randomly spawning cars throughout the game (and possibly other players’ vehicles too) you can initiate a lockpicking minigame that scales in difficulty depending on the vehicle class.

The goal of the minigame is to apply the right amount of power to each pin so the pin marker lines up with the lock turnpoint. Putting too much or too little power on the lockpick might cause it to break, or set off the vehicle’s alarm. When all the pins have been set correctly, the vehicle will unlock.

Randomly spawning vehicles and cars currently being driven by NPCs have a chance to be locked for the player.

This script has been released before for ESX Framework, we’ve worked out a way to do make it standalone although it has few less features due to the lack of framework (That’s why it’s released separately for a lower price)

Looks really nice, I have a few questions.

What is the performance on it?
I assume this works with all locked vehicles?
Is it fully unlocked and on buy do I get access to the source code?

It has been completely optimised to run as smoothly as possible.

Yes, It works with any locked vehicle.

Is there a way to blacklist npc vehicles? For example for ai taxi, so doors aren’t locked. And other scripts vehicles?

Well, you can either disable strict vehicle locking which will only lock naturally spawned vehicles and any vehicles spawned by a script should be ignored, if you want to prevent players from lockpicking certain vehicles you could do that by blacklisting an vehicle class at the moment

Interesting. I have seen this in a House Theft Game lol

Man, you don’t need to repost it every 15 or 30 days, I’ve already seen this script at least 4 times in 4 different posts, you deleted all the others but one, please stop spamming:

As stated below “This script has been released before for ESX Framework, we’ve worked out a way to do make it standalone although it has few less features due to the lack of framework (That’s why it’s released separately for a lower price)”

It’s been re-released as a standalone version for lower price due to different and lack of some features. Before that it was unlisted from the forums because the mods thought that it was obfuscated which it was not so the mod listed it again

ok, understood, my bad, I just said that because I’ve seen it a lot of time but if you changed it to standalone that’s nice, I’m sorry