Sarsaparilla RP - "Partners and role players with our community"" 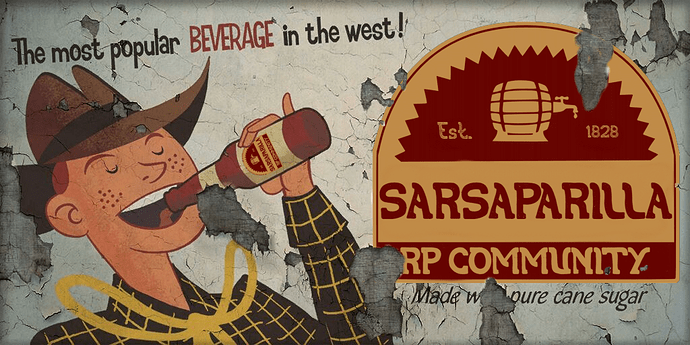 Sarsaparilla RP is a server intent on establishing a welcoming environment to facilitate the creation of deep organic roleplay and story! Created by a group of experienced and long time roleplayers within the RedM community with a vision to give another bit of flavor to the community!

“Partners and roleplayers with our community, promises made and promises kept” is our motto!

Our content has been implemented with the mindset of RP behind every aspect. Immersion and survival are the way of the gaming world nowadays and we aim to facilitate that! If you have an RP idea, you have a business you want to run. We are your haven! Want to get into deep law investigations? Become a judge, an attorney this is the place. Bounty hunting? Rancher? Farmer or even a train conductor? Want to be the mastermind behind a criminal empire? Would you like to be part of the first nations and get your native RP on and perhaps become a medicine man? LOOK NO FURTHER!

Come give us a shot! Maybe we are your cup of tea, maybe we aren’t, but we would sure would like to be!