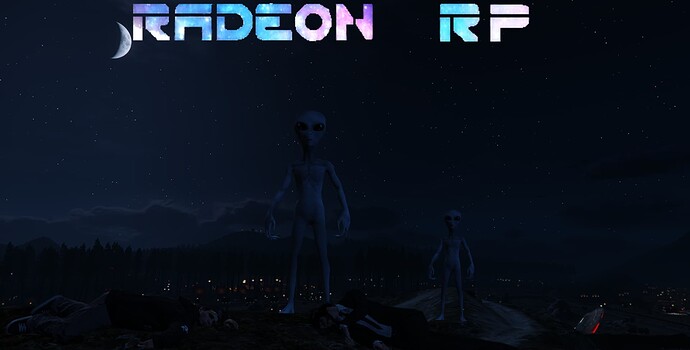 Radeon Roleplay was first created in mid 2021, by me and my brother. It’s a semi-serious role-play server that we’ve been working on ever since. We’re looking for new players to join us in building the community and a few dedicated individuals to join our staff!
We gladly accept new and experienced players alike. If you’re new to RP servers, don’t worry, we can show you the ropes.

With much more to be found within the City.

The City also offers a variety of jobs including:

And more to come! The City is still being developed, with everything still being refined all the time.

Are you into chasing criminals and making busts? Then this is probably the job for you. The City takes the police seriously and we need able recruits.

You looking to save lives and rescue those in distress? Then this might be the profession you’re looking for. EMS and Doctors of the like are all respected within the City. They will more than often be accompanying the Police in most events.

Are you interested in fixing vehicles and tuning them up for the Police? Or maybe for a criminal organization? Maybe you should become a Mechanic. Mechanic’s are also respected and maybe sometimes disliked. Depends on what you choose to do.

Ever wanted to serve drinks in a Neon Gaming Bar? Well now you can here at Cyber Bar. Mix different ingredients to make different themed drinks. Or maybe make some interesting themed food.

There are many other whitelisted jobs coming and being worked on as the City is ever expanding.

Each organization has its own vehicles and weapons that match to its theme. They also each have an individual goal or backing to why they do what they do.

Well-suited organization that tends to focus on gun-running. Moving weapons for a profit can be a great thing for an ambitious citizen in the City.

Dangerous organization that mostly keeps to pushing drugs. Drugs can be a large profit in big quantities. Also takes the knowledge of some recipes and lab locations.

A street smart organization that dabbles in a bit of everything. Moving drugs and guns is just the base of what they do.

There’s so much more in the City to be discovered and created. The City is still fairly new and is changing for the better all the time. We also love feedback. We’ll keep working on the City until we believe we have it just right. We hope to see you in the City to join us in the experience.

Join the Discord at: Radeon Roleplay
Come have a chat with us with any questions you may have about the server, or just to have a chat.
Join the Server at: cfx.re/join/ed6lpp