Are you searching for a unique and highly configurable death system? You are in the right place!

This script will completely replace the esx_ambulancejob default death system (if you need help to remove the death code from ambulancejob just DM me!) 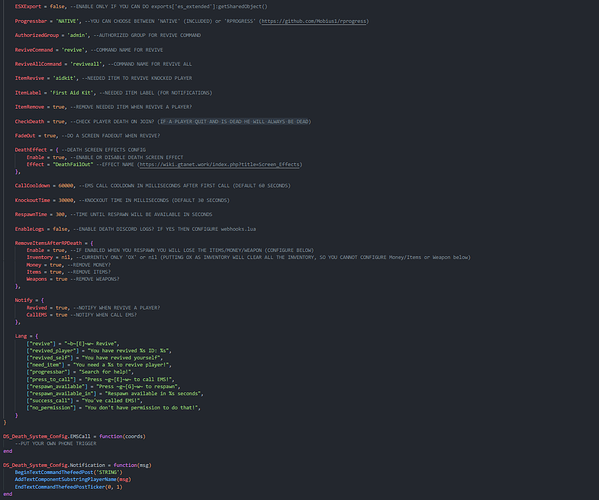 Any chance of getting an un-obfuscated version or one with an accessible function lua for the revives so people can integrate things like their injury systems?

The trigger, so say if you were using a derivative of mythic hospital you can add your removebleed and removeinjury lines if you wanted those to be solved on a revive.

Updated right now, added a function in config to trigger/export what you want on revive

Last question before I buy - Is it possible for us to remove the [E] revive prompt and instead have a function we can activate to revive the nearby player? As i’d prefer to integrate it into a radial menu.

Thanks for the update!

Sure, will add a function today!

Hi,
I have some awesome ideas to change with the current system you have shown here.

Its possible to add quasar inventory for removing items, weapons and money after death? And can you do headshot will kill player? Because thats more realistic then knocked out after a headshot

I will ask to quasar some infos to implement that because I don’t have this resource, also I will try to add a configurable option for headshot in config on the next update!

Here you can take a look at point 11 how to remove items.

Added “HeadShotDeath” in config (Instant death if player is headshotted, so no knockout)

Added a function in config to trigger/export what you want on respawn
Added respawn cost (you can enable/disable)
Optimized performance when near the “revive” 3dtext to 0.07 / 0.08 ms instead of 0.17 ms
Added new translations